Anushka Sharma is all hearts for Kareena's pics with Jeh 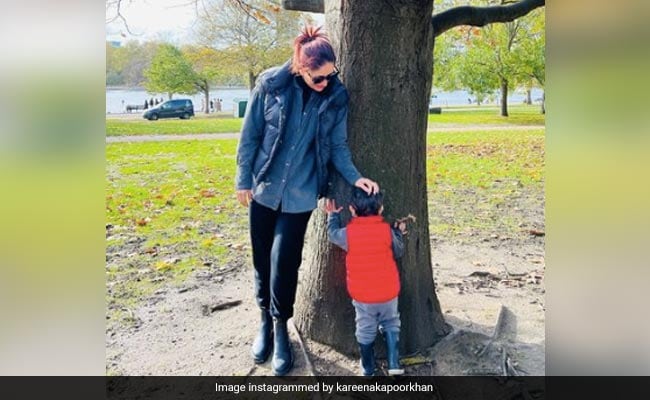 Kareena Kapoor, who is currently in London shooting for her film, has taken a day off from work and decided to spend it with her younger son Jeh Ali Khan. On Wednesday evening, the actor shared a couple of adorable pictures of herself with her son Jeh from a park in London and it's all things cute. In the pictures, Jeh looks adorable in winter clothes and cute little boots paired with red overcoat, whereas, his mother looked gorgeous as usual in her winter look. However, Jeh, who looks amazed by the tall trees around him, has managed to not show his face in any of the pictures. In the pictures, Jeh can also be seen hugging and kissing one of the trees in the park. Sharing the pictures, Kareena wrote, "Kiss a tree... Be free... Fall with the love of my life. Day off from work... Loving it.

Kareena Kapoor's adorable post caught the attention of Anushka Sharma, who was all hearts for Jeh's adorable pics. She dropped a heart in the post's comment section.

<,p>On Halloween, the actor shared a blur picture of herself from what looks like the woods in London, wishing Halloween to her followers.

Kareena Kapoor was in London until a few days ago for the shoot of her film, before she decided to return to India for her 10 years anniversary with her husband Saif Ali Khan and Diwali.

The actor posted adorable pictures of herself with Saif Ali Khan on Instagram, marking her anniversary and wishing her husband, who doesn't have an official account on the platform.

Kareena also shared pictures of her family on the occasion of Diwali, wishing her fans. Her post featured Kareena along with Saif Ali Khan and her sons Taimur and Jeh. While Taimur posed in style, cute little Jeh was seen rolling on the floor crying.

After the celebrations, Kareena has returned to London to resume the shoot of her film, which is being directed by Hansal Mehta.

Kareena Kapoor, who was recently seen in Aamir Khan's Laal Singh Chaddha, will also be seen in The Devotion Of Suspect X, also starring Vijay Varma and Jaideep Ahlawat.