"Such a star... I mean the mask": Isn't Kareena talking about herself? Guess we'll never know 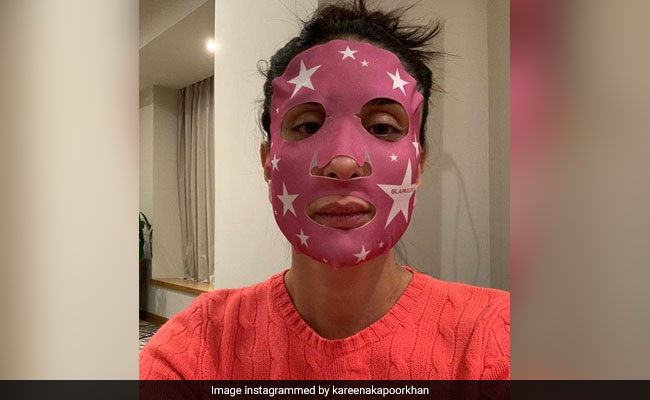 It's not even been a week that Kareena Kapoor's made her official entry to Instagram and she's already taken over and how! The 39-year-old actress has been slicing out time from her busy schedule and posting glimpses of her life pretty frequently on Instagram. And, we love it. Kareena Kapoor is reputed for the star she is and also her sass level, a glimpse of which we just saw on Instagram with her face mask post. Kareena doesn't mind posting selfies of her in a face mask, especially if it comes with a cheeky caption. Kareena, her hair wound up in a messy bun, treated her face to a hydrating mask, which comes with stars printed on the outer side of it.

That's exactly what makes way for the pun in Kareena's caption: "Such a star... I mean the mask." Isn't she talking about herself? Guess we'll never know. Take a look at Kareena Kapoor's post here:

Such a star... I mean the mask

Kareena recently filled up her Instagram with a montage of some of her favourite Holi memories. "I think pink is my colour. Agree?" she wrote.

I think pink is my colour. Agree?

She's already introduced her sister Karisma and mother Babita with a post about powerful women: "Wonder women... My life in colour."

Wonder women... My life in colour

Earlier, some of Kareena's posts featured Saif Ali Khan and Taimur on Instagram like this: "My love... always playing his own tune," she wrote for Saif while for Taimur, she posted: "The only one I will ever allow to steal my frame."

On the work front, Kareena Kapoor is currently awaiting the release of Angrezi Medium. She also has movies such as Laal Singh Chaddha and Takht in her line-up.