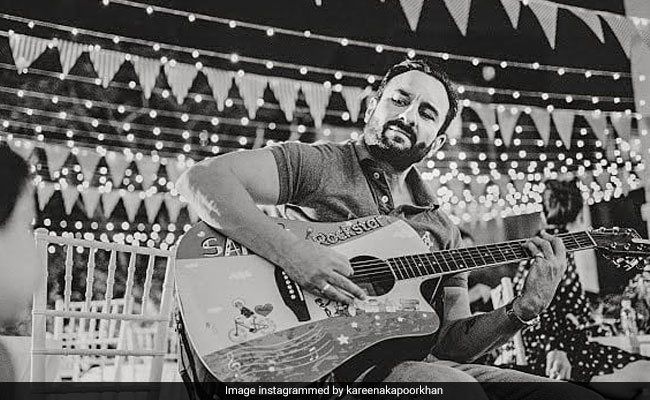 After Taimur, Saif Ali Khan made debut on Kareena Kapoor's Instagram and it is beyond adorable. The actress, who sent the Internet into a tizzy by officially joining the Instagram on Friday, updated her profile with a monochrome picture of her "love playing his own tune" on Saturday. In the photo, Saif Ali Khan can be seen playing a guitar in front of who appears to be his son Taimur. The little munchkin's face isn't clearly visible in the picture. Not just the photo of Saif Ali Khan but also Kareena's loved-up caption for him will make your heart flutter. She wrote: "My love... Always playing his own tune."

Soon after Kareena shared the picture of Saif Ali Khan, celebrities such as Amrita Arora, Arjun Kapoor and Siddhant Chaturvedi filled her post with adorable and funny comments. While Amrita, who is one of Kareena's close friends, wrote: "Saifu," Arjun Kapoor, as always, showed his hilarious side and commented: "This the closest he's ever getting to social media!" Siddhant's comment read: "Can't wait for him to be on Instagram."

In case you haven't seen Kareena Kapoor's post featuring Taimur, sharing which she wrote: "The only one I will ever allow to steal my frame," yet, take a look:

Kareena Kapoor, who herself has confessed about operating on an anonymous profile on Instagram earlier, announced her official arrival on the social media platform with a post saying: "Hello Instagram."

On the work front, Kareena Kapoor will next be seen in Irrfan Khan's Angrezi Medium. She also has movies such as Lal Singh Chaddha and Takht in the pipeline.