Kareena Kapoor Is Getting Closer To Her Fitness Goal, One Step At A Time 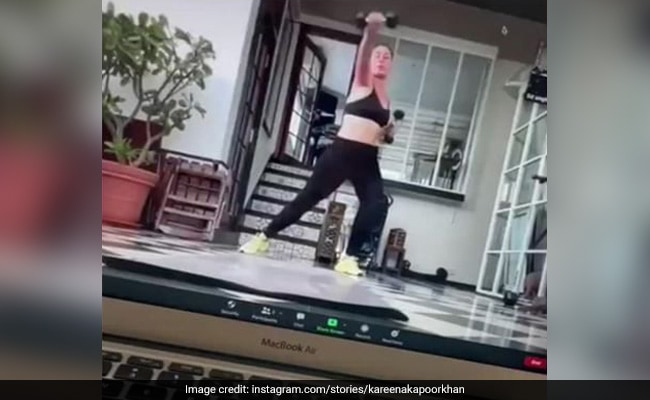 Kareena Kapoor in a still from her video. (Image courtesy: kareenakapoorkhan )

Kareena Kapoor, who welcomed her second child Jeh in February this year, is getting closer to her fitness goal each and every day. The actress, who began working out shortly after welcoming her second son, posted a glimpse of her virtual gym session with her trainer and wrote: "Getting there each day at a time...with my trainer...Gym time." In the clip that the actress shared on her Instagram story, Kareena Kapoor can be seen doing arms and legs workout routines at her home as her trainer guides her during their online session. She looks cool in a black sports bra and tights. Kareena Kapoor, who is married to actor Saif Ali Khan, welcomed her first child, son Taimur, in December 2016. Kareena and Saif's second son Jeh was born on February 21 this year.

In terms of work, Kareena Kapoor made her debut in Bollywood with JP Dutta's 2000 film Refugee, co-starring Abhishek Bachchan. She is known for her performances in films like Jab We Met, Ra.One, Tashan, Good Newwz, 3 Idiots, Heroine, Aitraaz, Kurbaan, Talaash, Asoka, Bodyguard, Omkara and Veere Di Wedding among others.

The actress will next be seen in Karan Johar's period drama Takht and Lal Singh Chaddha, in which she will share screen space with Aamir Khan. Lal Singh Chaddha will release on Christmas this year.