As the name suggests, the song is all about Kareena Kapoor's Laal Ghaghra, who steals the thunder at what appears to be a wedding function 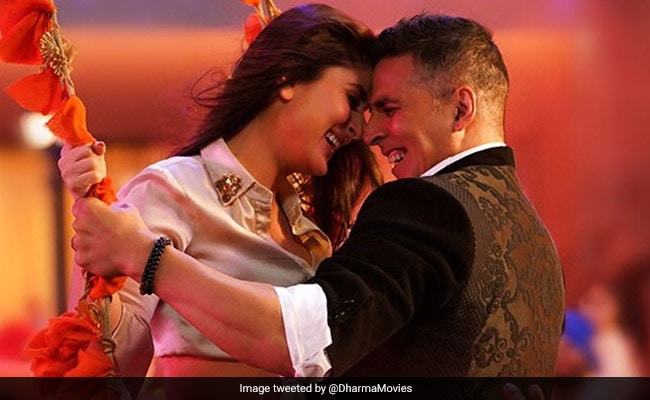 Kareena and Akshay in a still from Laal Ghaghra (courtesy DharmaMovies)

Akshay Kumar just added a new song Laal Ghaghra to the Good Newwz playlist and the foot-tapping number is guaranteed to make you dance if you are a fan of dhol beats. As the name suggests, the song is all about Kareena Kapoor's Laal Ghaghra, who steals the thunder at what appears to be a wedding function. The song begins with Akshay Kumar dancing his heart out to crazy dhol beats and is soon joined by Kareena on the dance floor. The duo pump up the beat with some quirky and some bhangra moves in Laal Ghaghra. Towards the end of the song, Akshay Kumar is so inspired by Kareena's Laal Ghaghra that he quickly changes into a Laal Ghaghra himself and twins with Kareena.

Laal Ghaghra is a redux of the now-dismantled band RDB and has been sung by RDB lead singer Manj Musik along with Herbie Sahara and Neha Kakkar. It is the third song from the film to be released. Credits for the dhol beats go to Hanif and Aslam. Watch Laal Ghaghra from Good Newwz here:

Earlier, Team Good Newwz gave us a new <>shaadi song with Sauda Khara Khara, which is all about Akshay Kumar, Diljit Dosanjh and Kiara Advani's bhangra in sneakers.

They also released a party song titled Chandigarh Mein, which features all four of Kareena, Akshay, Diljit and Kiara.

Good Newwz is the story of two couples, played by Kareena-Akshay and Kiara-Diljit, who go to the same hospital for In-vitro fertilisation or IVF but similar names lead to a major confusion. Directed by Raj Mehta, Good Newwz is all set to hit screens on December 27.