Chandigarh Mein: Karan Johar is the surprise element in the song 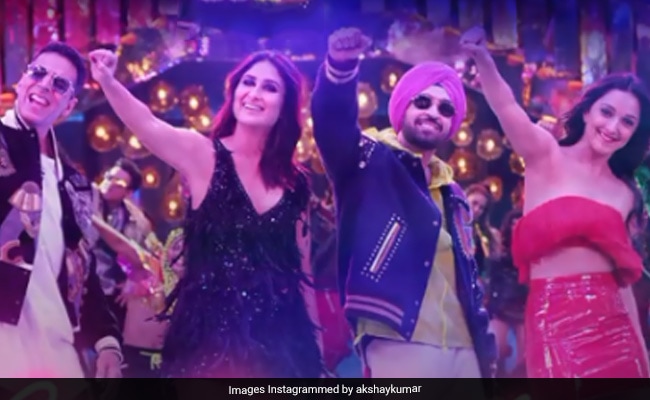 Chandigarh Mein: A still from the video. (Image courtesy: akshaykumar )

Hey folks, the wait is over. The first track Chandigarh Mein from the film Good Newwz hit the Internet on Wednesday evening and we are loving it. The song features Akshay Kumar, Kareena Kapoor, Kiara Advani and Diljit Dosanjh. Wait! There's Karan Johar too. Yes, the film's producer makes a surprise miss-and-blink appearance in the song. The quartet can be seen dancing their hearts out in the song. It wouldn't be wrong to say that Chandigarh Mein is arguably one of the biggest party songs of the year, what with so many stars on the dance floor together. The catchy lyrics and peppy music will compel you to groove and how.

Chandigarh Mein has been sung by several artistes including Badshah, Harrdy Sandhu, Lisa Mishra, Asees Kaur. The song has been composed by Tanishk Bagchi and the lyrics are also by him. The makers of the song described it as: "The biggest party song with the biggest party gang." Check out the song here:

Good Newwz showcases the stories of two couples, who visit the same hospital for the IVF treatment and since both the couples share the last name, their eggs and sperm get mixed up by the hospital staff, leading to a comedy of errors.

The film has been directed by Raj Mehta and it has been produced by Karan Johar, Hiroo Yash Johar, Aruna Bhatia, Apoorva Mehta and Shashank Khaitan. The film is slated to release on December 27 this year.

Akshay Kumar and Kareena Kapoor have earlier shared screen space in films like Kambakkht Ishq, Aitraaz,Tashan and Ajnabee among others.