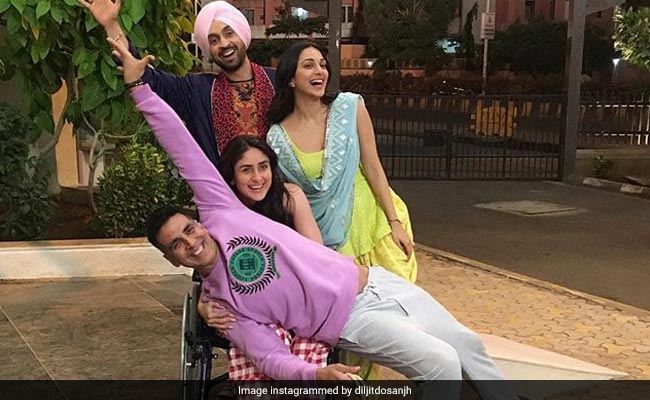 Good News! A happy picture of Kareena Kapoor, Akshay Kumar, Diljit Dosanjh and Kiara Advani from the sets of Good News will make your day. Diljit Dosanjh shared a glimpse of the fun times from the film's set on Instagram with a simple caption: "Awesome foursome." In the photo, Akshay Kumar can be seen balancing himself on Kareena's lap while Kiara and Diljit smile ear-to-ear. In the film, Kareena and Akshay feature as a couple who are trying to have their first baby. Kiara and Diljit have been cast as the younger couple in the film. Earlier, pictures of Kareena Kapoor with a 'baby bump' from the sets of the film sent netizens into a frenzy.

Take a look at the Good News post here:

In a recent interview with IANS, Akshay Kumar shared his experience of reuniting with Kareena on the big screen and working with Diljit for the first time: "Working with Bebo (Kareena) is always fun but Diljit and I get along like a house on fire, if I were to say so myself. Our Punjabi connect is amazing and I think it will show brilliantly on-screen."

In January, Kareena and Akshay participated in the #10YearChallenge to announce that they have finally begun shooting for Good News. Sharing a then and now post on Instagram, Akshay had written: "2009 to 2019, the Good News is that not much has changed, or so we hope. First day of shoot it is, do send in your best wishes." Kareena and Akshay have co-starred in films like Tashan, Aitraaz and Kambakkht Ishq.

2009 to 2019, the #GoodNews is that not much has changed, or so we hope First day of shoot it is, do send in your best wishes #10YearChallenge #KareenaKapoorKhan @karanjohar @apoorva1972 @raj_a_mehta @dharmamovies #CapeOfGoodFilms @shashankkhaitan

Diljit Dosanjh and Kiara Advani joined the sets of the film months ahead of Kareena and Akshay. Diljit marked his first day of Good News with a note that said: "It's a dream come true when you get to work with your favourite production house and an awesome team."

Directed by Raj Mehta, Good News is scheduled to hit screens on July 19, 2019.