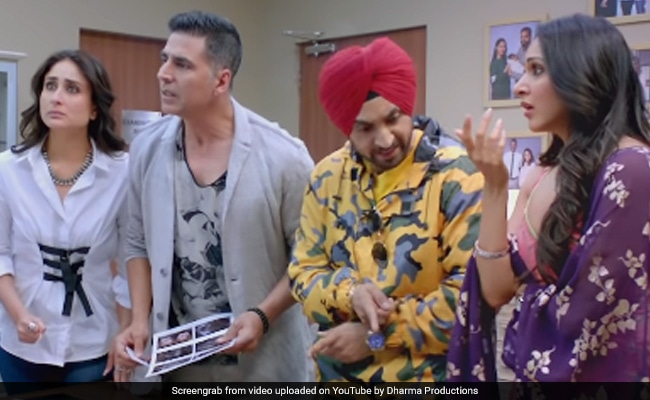 It's finally here! The much-anticipated trailer of Akshay Kumar, Kareena Kapoor, Kiara Advani and Diljit Dosanjh's Good Newwz dropped on the Internet today and it will definitely take you on a laughter ride. The trailer promises unlimited hilarious scenes of the confused pregnant couples Kareena-Akshay and Kiara-Diljit. The video starts with Deepti (Kareena) and Varun Batra (Akshay) discussing their sex lives with a doctor and went on to show the glimpses of the couple trying to get pregnant on multiple occasions. But what good is a story without a twist? Another Punjabi couple - Honey (Diljit) and Monika Batra (Kiara) - visit the same hospital for the IVF treatment. Since the couples share the last name, their eggs and sperm get mixed up by the hospital staff.

With this starts the ROFL journey of the couples, who interfere in each other's lifestyle to take care of their unborn child. The trailer features Adil Hussain as the doctor and Tisca Chopra in a supporting role.

Excited much to watch the trailer? Check it out:

Before Good Newwz, Kareena Kapoor and Akshay Kumar have worked together in films such as Kambakkht Ishq, Aitraaz, Tashan, Ajnabee, Brothers and Gabbar Is Back. Kareena has also worked with Diljit in Udta Punjab. Good Newwz will be Kareena and Kiara's first project together. It will also mark Akshay Kumar's first film with Diljit Dosanjh.