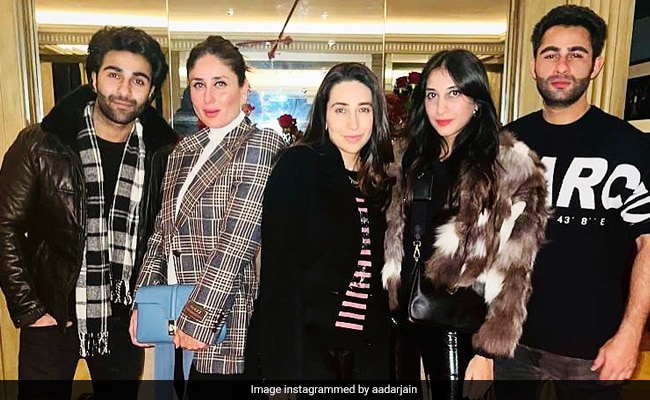 Kareena Kapoor and Karisma Kapoor share a great camaraderie with their cousins. They are often seen hanging out together and spending some quality time with each other. Now, Aadar Jain has shared a stunning picture of the cousins' get-together on social media. Guess what? Apart from Aadar, it features the Kapoor sisters, along with Armaan Jain and his wife Anissa Malhotra. The Kapoor sisters are dressed in their fashionable best as they pose for the lens. Aadar Jain didn't think much about the caption and just added a lack heart emoji.

The members of the Kapoor family are known for celebrating festivals with full vigour. Kareena recently hosted a Diwali party at her Mumbai residence. The occasion was graced by Kapoors and the Pataudis. Sharing a beautiful family picture, Kareena mentioned, "Pariveer (family)." Apart from Kareena and Karisma, one can see Neetu Kapoor, Soha Ali Khan, Saif Ali Khan and others in the picture.

On the work front, Kareena Kapoor is currently busy shooting for her film with Hansal Mehta and Ekta Kapoor. She was last seen in Laal Singh Chaddha alongside Aamir Khan, The film was a Hindi remake of the all-time classic Hollywood film Forrest Gump.

Meanwhile, Karisma Kapoor will next feature in Brown: The First Case. It also marks veteran actress Helen's return to the big screen.