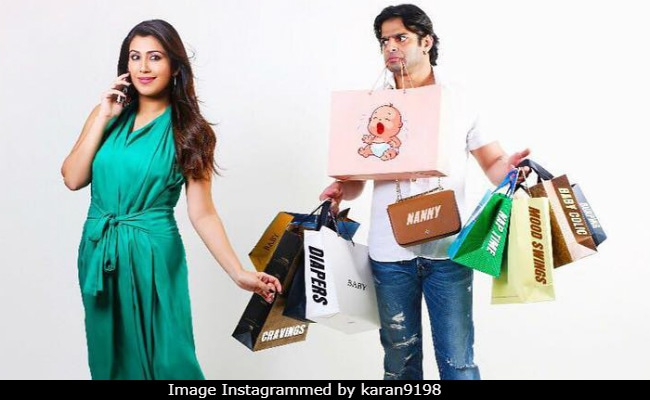 This is what Karan Patel shared on his Instagram (courtesy karan9198)

New Delhi: Congratulations, Karan Patel and Ankita Bhargava! The television stars are expecting their first baby and made the baby announcement with an adorable post on Instagram. Both Karan and Ankita shared the same photo on Instagram, which is designed like a movie poster and the details of which are also put in like release dates are mentioned in film posters. "Yeh Diwali Hogi Babywali" reads the headline on the poster while Karan shared it with this caption: "A lifelong festival begins for Ankita Bhargava and Me this November." He also added tags like "#ConnotWait", "#Excited", "#Blessed" and "#MomAndDaddaSoon." Karan Patel's post garnered over 29,750 'likes' in two hours.

This is what Ankita Bhargava wrote on her Instagram. "Thank you all for the love, support, prayers and positive energy that you all have consistently backed us up with.... Our very own Diwali Dhamaka 2018 coming soon," she wrote. The baby is due in November.

Here's how Ankita and Karan made the baby announcement:

Earlier this month, the star couple trended for reports which stated that Ankita was in her second trimester, when a source close to the couple had told Times Of India: "Karan and Ankita are ecstatic with this development in their life. They are, however, trying their best to keep the news under wraps because they plan to announce it at the right time."

Karan Patel married Ankita Bhargava in May 2015. Karan is best-known for his role on television's hit show Yeh Hai Mohabbatein, which also stars Divyanka Tripathi in the lead. Ankita Bhargava is known for her roles in shows like Ekk Nayi Pehchaan, Kesar and Karam Apnaa Apnaa.
Comments
karan patelabkita bhargava