Karan Johar's Son Yash Is A "Jewel Thief." Here's What He Did

"He's run away with your jewelry. Go, get your jewelry, he's a jewel thief," Karan can be heard saying at the end of the clip 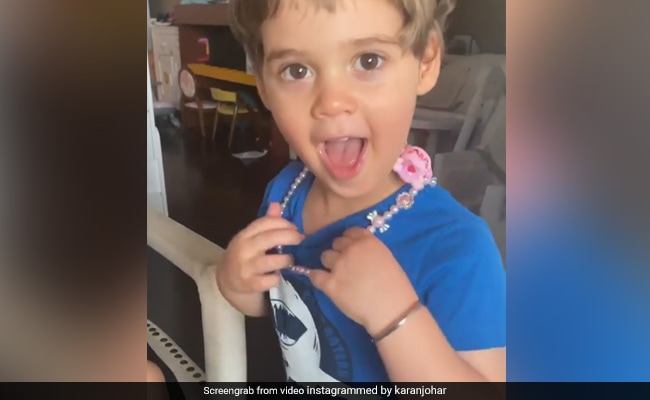 Yash in a still from the video posted by KJo. (Image courtesy: karanjohar)

Another day, another scene from Karan Johar's house. The director, whose Instagram is filled with adorable videos of his twins Yash and Roohi, shared a new episode of "Lockdown With The Johars" on Thursday and it is really hilarious, courtesy "jewel thief" Yash. The new video starts with Roohi playing with what appears to be a bracelet and Yash checking out her other jewelry. "Roohi, I believe you are throwing a party," Karan asks his little girl in the video after which Roohi replies: "No, Yash is having a party." When Karan gives Yash compliments for wearing Roohi's necklace by calling him "pretty," the little munchkin replies: "I am not pretty, I'm Yash bhaiya." LOL.

While Karan asks the duo if they think his mom Hiroo Johar is pretty, Yash suddenly runs away with Roohi's necklace. "He's run away with your jewelry. Go, get your jewelry, he's a jewel thief," Karan can be heard saying at the end of the clip.

Karan's previous "Lockdown With The Johars" episodes feature the duo invading his huge walk-in closet and goofing around with him in his washroom. The duo also recently made their Koffee With Karan-style Rapid Fire debut and talked about their friends AbRam and Taimur. Check out the videos here:

Karan Johar has backed many films such as Kal Ho Naa Ho, Kaal, Kabhi Alvida Naa Kehna, Wake Up Sid, Agneepath, Yeh Jawaani Hai Deewani and Badrinath Ki Dulhania among others. He has also directed movies such as Kuch Kuch Hota Hai, Kabhi Khushi Kabhie Gham, My Name Is Khan and Student Of The Year. He will also be directing the period drama Takht. His upcoming ventures as a producer include Sooryavanshi, Dostana 2, and Brahmastra.