Karan Johar's Kids Roohi And Yash Are Critiquing Grandmom Hiroo Now. Would You Just Look At That?

Karan Johar and his twins had a hilarious conversation over lollipops, cakes and spiders 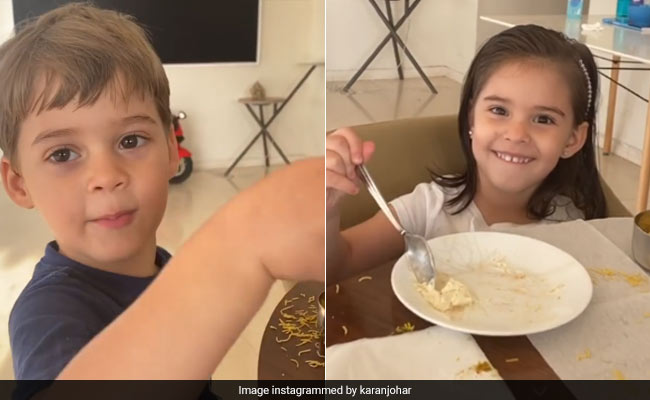 Karan Johar is making the most of his lockdown by spending all his time with his kids Yash and Roohi and mom Hiroo Johar. KJo has also been sharing adorable snippets from his high tea sessions with the twins and of their adventures in his walk-in closet. On Sunday evening, the Johar quartet sat down for evening snacks and had a hilarious conversation over lollipops, cakes and spiders. "A random snack time! And the focus has now shifted to mama! Do watch till the end," KJo captioned his video. Yash and Roohi, who have been busy ripping apart Karan Johar's sense of fashion, "shifted" the focus to their grandmom when KJo asked whether she resembles a strawberry or not.

"She looks like a spider!" said Roohi. LOL. Meanwhile, Yash wanted to stir KJo's tea, who hilariously said Yash can't do that with his "dirty chammach." Watch the ROFL video here:

A random snack time! And the focus has now shifted to mama! Do watch till the end #lockdownwiththejohars

In a recent video, Roohi and Yash can be seen raiding KJo's closet again. While Roohi was in the mood for some music, Yash played hide-n-seek with KJo in the closet. "Delirium has hit us all," the 47-year-old filmmaker captioned his post.

Delirium has hit us all! #lockdownwiththejohars #toodles

Meanwhile, Karan also revealed that his twins love to go inside his closet because they think there's Shah Rukh Khan in it, courtesy a huge poster of Mick Jagger. "Apparently we had a superstar spotting in my closet! Do watch! I also got a firing," wrote KJo.

Apparently we had a superstar spotting in my closet! Do watch! I also got a firing! #lockdownwiththejohars #toodles

Karan Johar's Dharma Productions was one of the first major Bollywood firms to stop all production work during the coronavirus outbreak. Karan Johar became a single parent when Roohi and Yash were born via surrogacy in 2017.