When your dream comes true wonderful time spent with the legend of our film industry," wrote Kapil Sharma 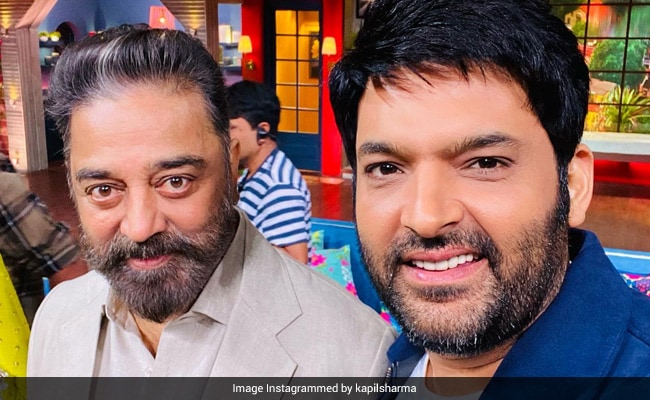 Comedian Kapil Sharma is on cloud nine as his dream has finally come true after meeting legendary actor Kamal Haasan. The 41-year-old shared an adorable post on his Instagram handle from the sets ofThe Kapil Sharma Show, featuring the Kapil with Kamal Haasan, Archana Puran Singh, Kiku Sharda and Krushna Abhishek. The 67-year-old actor appeared on the comedy show to promote his upcoming film, Vikram. In the first photo, Kamal looks dapper in formal attire, while Kapil looks handsome in a white t-shirt layered with a blue jacket.

In the second and third photos, Archana Puran Singh looks gorgeous in a yellow ethnic outfit, while Krushna Abhishek and Kiku Sharda are in their usual costume. Sharing the post, Kapil Sharma captioned it as "When your dream comes true wonderful time spent with the legend of our film industry Mr @ikamalhaasan what an actor n what a great human being.Thank you for gracing our show sir best wishes for #vikram love n regards always #tkss #thekapilsharmashow #comingsoon".

Helmed by Lokesh Kanagaraj, the film also stars Vijay Sethupathi, Fahadh Faasil, Kalidas Jayaram and Narain in pivotal roles. The film will hit the theatres on June 3, 2022. Recently, Kamal Haasan shared a post on his Instagram handle, which read, "I am waiting with bated breath for our Vikram to release world over, in theatres on June 3rd 2022. #VikramFromJune3."

Meanwhile, Kapil Sharma will next be seen in Nandita Das' untitled film with Shahana Goswami. He will play the role of a food delivery guy in the film.