Rangoli Chandel is arguing with Kamaal R Khan after Zarina Wahab's recent interview, in which she said she never treated Kangana like her daughter as claimed and was never asked for help 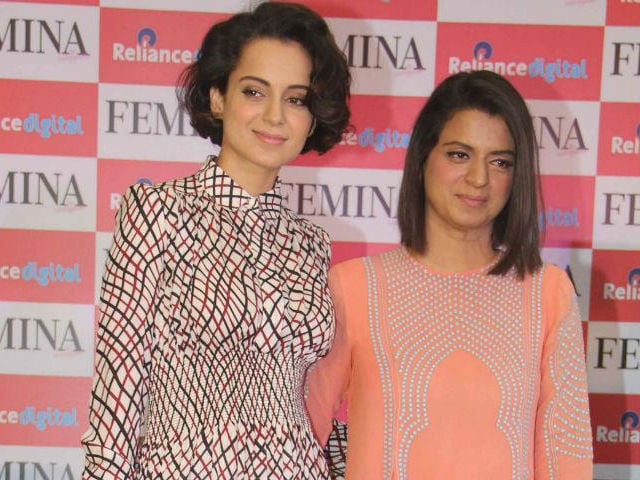 Kangana Ranaut and and Rangoli in Mumbai.

New Delhi: Battlelines have been drawn on Twitter. Self-appointed critic Kamaal R Khan or KRK, whose pronouncements are usually ignored by the film fraternity, has found someone to engage with. Kangana Ranaut's sister Rangoli Chandel has responded with what KRK must consider satisfying fury to his tweets about the actress and her new film Simran. Kangana Ranaut's latest revelations about having asked Zarina Wahab to 'save' her from husband Aditya Pancholi are the subject of today's headlines - Ms Wahab has responded to say she never treated Kangana like her daughter as claimed and was never asked for help. In the wake of this interview, given to Pinkvilla, KRK and Rangoli are arguing online.

It began with this typically belligerent tweet from KRK:

KRK's move - Kangana and Rangoli are lying, he says, and Simran is headed for disaster:

I am totally nothing have to do with Kangana n her ex boyfriends but I am fed up with lies of these 2 sisters, so I have to review it.

Report is out from CBFC members who watched it n #Simran is a Wahiyat, Crap n Ghatiya film. It will be used to torture prisoners in Jails.

Rangoli was still fuming and she can clearly play as dirty as KRK (we aren't going to reproduce his offensive tweet about Rangoli being an acid attack survivor):

Show us d proof not who said what?? I challenge you to call DAV sector 15 Chandigarh and find out which year Kangana passed out from school https://t.co/aJLR6KEYTY

Anyone can call DAV sector 15 and find out which year Kangana passed out from school..... @kamaalrkhan

...... She was in hostel if she never came to Mumbai in 2003 how will she meet Aaditya in Mumbai?@kamaalrkhan

I hav nothing 2do, how many boyfrinds ur sister had but why r u lying n abusing a respectd lady Zarina Ji who is ur mother's age. @Rangoli_A

There was also a befuddling claim from KRK about Kangana and Rangoli having been run out of Himachal Pradesh.

Promoted
Listen to the latest songs, only on JioSaavn.com
Kangana Ranaut isn't on social media but clearly she has no need to be. The 30-year-old actress has kept the press busy these last few days with a veritable cornucopia of headline-worthy quotes about her romantic past. Speaking to TV shows in New Delhi, Kangana alleged that she had been a minor when dating Aditya Pancholi years ago. She said she's been younger than his daughter and had appealed to Zarina Wahab for help ending the relationship because she couldn't tell her parents. Kangana also invoked her alleged romance with Hrithik Roshan - which he denies - and said she wants an apology from him and his father Rakesh Roshan for the legal notice and whatnot they sent her last year.