"The news which has been floating around is false and baseless which should not be allowed to grow," Ashwini Iyer Tiwari said 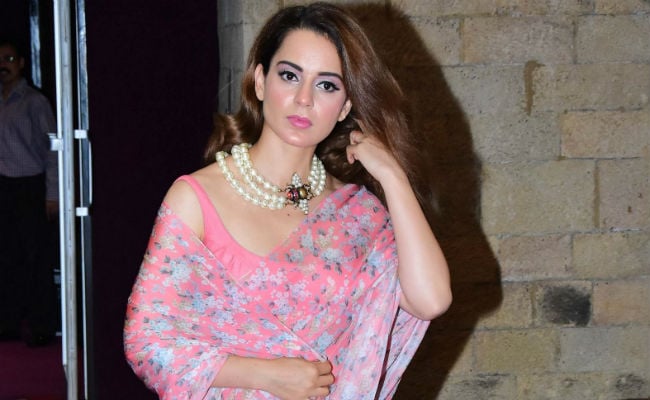 Kangana Ranaut photographed at an event in Mumbai

Ashwini Iyer Tiwari, who is directing Kangana Ranaut in Panga, has dismissed reports that she signed a "non-interference clause" with the actress for their upcoming film, reports news agency PTI. These reports followed after Kangana took over the director's chair for a few portions of her ambitious project Manikarnika: The Queen of Jhansi, which she is currently filming. Ms Tiwari said that the rumours about signing the clause with Kangana are "false and baseless". "For me, Panga is a story which I wanted to tell. A story very close to my heart and I could see only Kangana bringing life to the character. I request everyone not to be judgemental and together allow me to breathe the air of oneness like the support and love you have given me for my previous films," she said in a statement, PTI reports.

"The news which has been floating around is false and baseless which should not be allowed to grow... Movies are the greatest of all art forms, the most immediate way in which a human being can share with another the sense of what it is to be a human being. With Panga, let's tell only stories of love," Ashwini Iyer Tiwari added.

Manikarnika: The Queen Of Jhansi is directed by Krish Jagarlamudi and some weeks ago, several reports stated that he has quit the project. However, team Manikarnika later released a statement, which stated that Krish is still the director of the film, but is busy with some other projects and in his absence, Kangana is directing the portions left to complete it. During that time, Sonu Sood also opted out of Manikarnika due to a scheduling conflict. Of Sonu's decision to quit the film, Kangana said that he "refused to work under a woman director."

Meanwhile, Kangana's sister Rangoli shared a strong message to support the actress and also posted Ashwini Iyer Tiwari's statement in her tweet. "All the people who are belittling and shaming a young girl for taking difficult time head on should learn lessons of humanity from a woman like Ashwiny Iyer Tiwari... Kangana deserves directors like her... Cheers to girls standing for girls," she wrote.

All the people who are belittling and shaming a Young girl for taking difficult time head on should learn lessons of humanity from a woman like @Ashwinyiyer .... Kangana deserves directors like her .... cheers to girls standing for girls pic.twitter.com/ibGoJE24Rt

Living each day with happiness and oneness is our reason to exist in life. Thank-you dearest Kangana for an amazing afternoon full of delicious lunch, laughters and by the way 'work' alsoA team that loves food & eats together. Abhi toh majja shuru hua hai. #pangastories#pangapic.twitter.com/v2hwjK0YDu