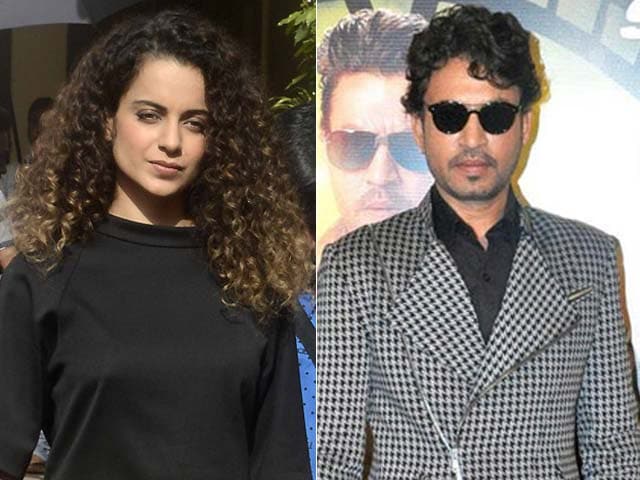 Kangana and Irrfan last worked together in 2007's Life in a... Metro

Titled Ae Mohabbat, the film on the life and times of the singer was announced on Tuesday by Shri Anup Jalota Productions and Ae Mohabbat Productions. (Also Read: 'Kangana is Real, Comes From Nowhere,' Says Kapil Sharma's Heroine Simran)

Actor Irrfan Khan will play the male lead. The film's leading lady is yet to be finalised, but Kangana may reportedly end up doing the project. Oscar winner AR Rahman will score the film's music.

"We are trying to get Kangana Ranaut to play one of the stages of Begum Akhtar in the film," Mr Jalota told IANS when asked about the female lead of the film.

"We have grown up listening to and idolising Begum Akhtar. I have been wanting to initiate such project and a tie-up with Ae Mohabbat Productions. Associating with Rita Ganguly, who knew her personally, is a real blessing," he added.

Rita Ganguly, who used to be a student of Begum Akhtar, and calls her "Ammi", says that the noted singer's life, the highs and lows she went through and her personality 'had a cinema quality' which could be made into full-length feature film.

"It is not really a biopic but a feature film. The screenplay is ready and it will have full formula of a superhit film . We are planning to release it next year as it's a period film and lot goes behind making such projects," Ms Ganguly told IANS.

As Begum Akhtar originally belonged to Faizabad and was buried in Lucknow, the film also got the support from Uttar Pradesh government, Mr Jalota revealed.

An icon of Indian classical music, Begum Akhtar was bestowed with the Padma Shri and Padma Bhushan posthumously by the government.