Ankita Lokhande made her Bollywood debut with Kangana Ranaut's Manikarnika: The Queen of Jhansi 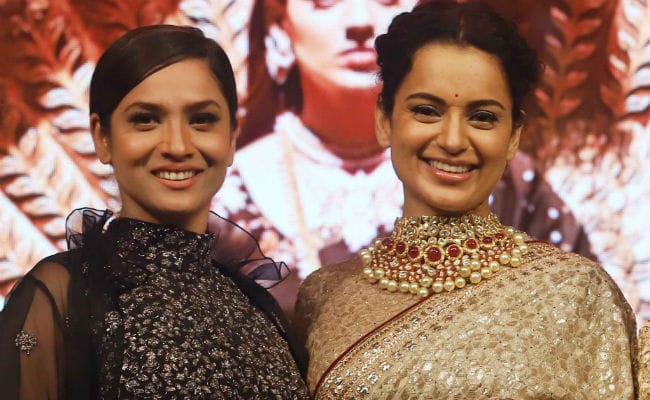 Kangana Ranaut and Ankita Lokhande at Manikarnika: The Queen of Jhansi's music launch

Actress Ankita Lokhande, who made her big Bollywood debut with Manikarnika: The Queen of Jhansi, is one among those supporting Kangana Ranaut in her feud with co-director Krish. Ankita plays Jhalkari Bai - Rani Laxmi Bai's chief commander - in Manikarnika, headlined by Kangana. On the sidelines of the Lakme Fashion Week, Ankita told news agency IANS that in real life too, she is protecting Kangana like Jhalkari Bai does in the film. "I have loved Manikarnika and I have loved Kangana for what she is. Most of my scenes have been shot by her, and that's for sure. I respect her for that. I think I am becoming Jhalkari Bai and I am really guarding my Rani Laxmi Bai, because she is Rani Laxmi Bai. She has proved herself," Ankita said.

"I am playing my character here also in my real life. I am actually protecting Rani Laxmi Bai," Ankita added.

And so it begins!!! #jhalkaribai #manikarnika

Kangana and Krish are fighting over the film's primary director's credit. Kangana's sister Rangoli Chandel claims that the actress directed major portions of the film that has been presented in the final cut while Krisha says he has directed 70 per cent of the film. Kangana's another co-star Mishti Chakravarty sided with Krish and also added that she was surprised to see how her role in the final version shaped up. "If somebody tells you that you are playing an important character in the film, but when the film releases, you come to know that somebody has tricked you then it feels really bad," Mishti earlier told IANS.

On the Manikarnika controversy, Ankita told IANS, "I don't really think I need to react on it. I am in a happy phase and that's how I am. We all have done hard work towards this film. Sometimes it is okay that results don't come out the way you expect them to, and I am not saying this just because I am getting praise."

"But even if it would have happened to me, I would have been positive. This is my debut film. I understand as an actor... I don't know, they may be going through something or they must be feeling something. I have always been positive about things," Ankita added.

Meanwhile, at the box office, Manikarnika: The Queen Of Jhansi has so far collected over Rs 60 crore.