Kangana Ranaut And Her Nephew Prithvi Raj Are 'Inseparable,' Per Rangoli Chandel

"As if he knows that the most beautiful girl on this planet kissing him," wrote Rangoli Chandel 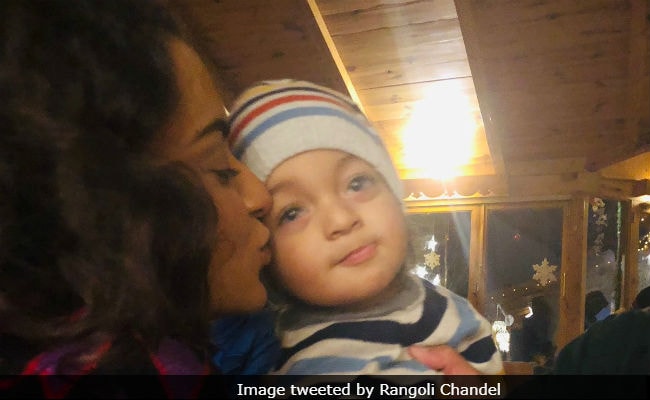 Just when we thought Kangana Ranaut and her nephew Prithvi Raj couldn't get any cuter, the actress' sister Rangoli Chandel treated us to another adorable picture of the duo. Rangoli shared a throwback picture on her Twitter account and accompanied the post with the most adorable caption. She wrote: "As if he knows that the most beautiful girl on this planet kissing him!" She added hashtags like "my cuties" and "throwback" on the picture. In the super cute picture, Kangana Ranaut can be seen planting a kiss on Prithvi's cheeks and the expression on his face is simply priceless. Rangoli also shared the picture on her Instagram profile and wrote: "Prithu and maasi are inseparable!"

Without much ado, check out the picture here:

As if he knows that the most beautiful girl on this planet kissing him !! #throwback#mycutiespic.twitter.com/3CeQ5BiZbu

We simply love it when Prithvi Raj makes appearances on his maasi's Instagram profile. Prithvi frequently visits Kangana on the sets of her movies. A few months ago, he dropped by the sets of Manikarnika: The Queen Of Jhansi. He even accompanied his parents on the sets of Mental Hai Kya.

Kangana Ranaut is a doting maasi and these pictures are proof:

My two cuties !!! Maasi & Prithu are having lovely time in Manali !! This time Diwali in Manali !!

On the work front, Kangana Ranaut is currently busy with the promotional duties of her forthcoming film Manikarnika: The Queen Of Jhansi, a biopic on Rani Laxmi Bai, in which she plays the titular role. Kangana's line-up of films also includes Panga, in which she will reportedly be seen playing the role of a hockey player. She also has Mental Hai Kya, co-starring Rajkummar Rao in the pipeline.