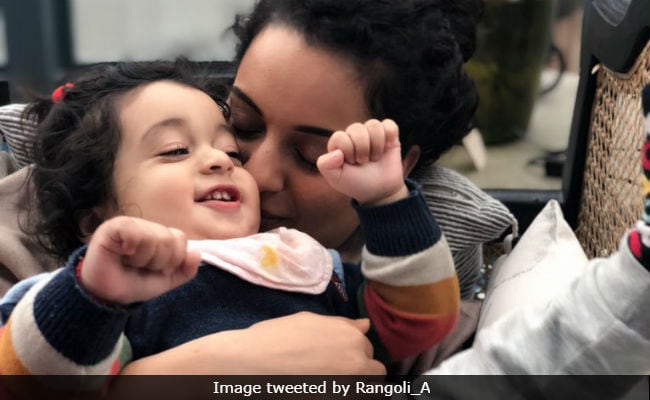 Kangana Ranaut's sister Rangoli Chandel shared a throwback picture of her son Prithvi Raj and her sister Kangana Ranaut on her Twitter account on Tuesday evening and cute is how is we would describe it. In the picture, Kangana can be seen planting a kiss on her nephew's cheek as he sits curled up in Kangana's arms and the expression on his face is simply priceless. Prithvi can be seen enjoying his maasi's company and his bright smile is proof. Rangoli captioned the picture: "Maasi's little boy." In her post, she also revealed that the photograph was taken in Manali (where Kangana Ranaut owns a plush bungalow).

Earlier this month, Kangana's sister Rangoli Chandel shared post-card worthy photos from their family's Diwali celebrations against the picturesque locations of Manali but the picture that stole our hearts was the one in which Prithvi Raj could be seen resting on Kangana's shoulders:

Here are some more pictures of Kangana Ranaut and Prithvi Raj:

On the work front, Kangana Ranaut is busy with films such as Manikarnika: The Queen Of Jhansi, which is a biopic on Rani Lakshmi Bai and Panga, in which she will reportedly be sen playing the role of a hockey player. Kangana Ranaut also has Mental Hai Kya, co-starring Rajkummar Rao in the pipeline.