How cute are these photos of Kangana and Prithvi Raj! 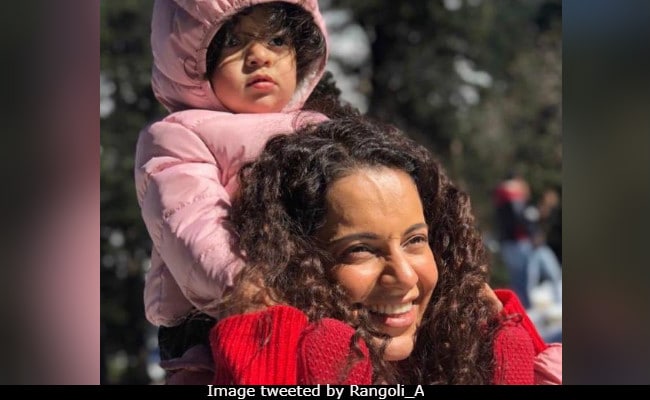 Actress Kangana Ranaut is tucked away in a cosy corner in Manali this Diwali, which also marks the first Diwali for her baby nephew Prithvi Raj. Kangana and her family have headed to the hills of Manali, where the actress owns a plush bungalow, which also featured on Architectural Digest for its stunning architecture and interiors. Kangana's sister Rangoli Chandel shared post-card worthy photos from the family's Diwali celebrations against the picturesque locations of snow-powered Manali, one of which also feature her husband Ajay Chandel and Kangana's brother Akshit. Needless to say that it's baby Prithvi Raj who steals the show in the pictures!

Rangoli, who shared a family collage on Twitter, wrote: "The love of a family is the key to eternal happiness." Rangoli also shared a glimpse of Prithvi Raj being adorable with Kangana, who is the little one's "first love". "First Diwali first snow first love," Rangoli captioned the photo.

Pictures of Kangana and Prithvi Raj celebrating chhoti Diwali will make it snow on your screen!

The love of a family is the key to eternal happiness !! #FestiveSeason#festivemood#HappyChotiDiwalipic.twitter.com/aM3rtW1cAw

Winters in Manali!!! They are unstoppable , it's called being pahadi pic.twitter.com/eZ1vz2s1TQ

Speaking to Mumbai Mirror previously, Kangana said this year, there are more reasons to celebrate Diwali together as her brother Akshit was to officially introduce his girlfriend to the family. "My entire family will come together this Diwali. My brother is introducing us to his girlfriend and making the relationship official, so we wanted to be together on this special day. It's also my nephew Prithvi Raj's first Diwali. Since he's just a baby we will avoid noisy crackers," Mumbai Mirror quoted the actress as saying.

Meanwhile, here's a look at Kangana Ranaut's swanky new Manali abode, which featured in headlines for its spectacular view and charming interiors. Speaking to Architectural Digest previously, Kangana described the spirit of the house as: "I thought this would be a retreat but it's the ultimate party house," and in her latest interview to Mumbai Mirror, she added: "My grand piano, a song and wine is my idea of a party so in a sense I will be partying this Diwali." Kangana's Manali home is the perfect blend of old school cottage and modern amenities, the first pictures of which were shared on Architectural Digest's May - June issue this year.

On the work front, Kangana Ranaut is busy with films such as Manikarnika: The Queen Of Jhansi, which is a biopic on Rani Lakshmi Bai, and Panga, in which she plays the role of a hockey player.