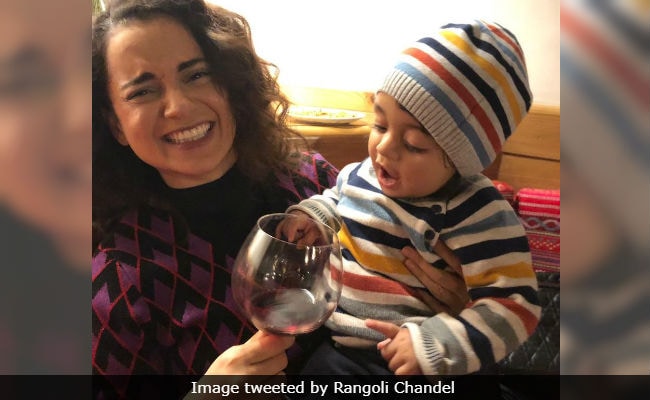 Kangana Ranaut rang in the New Year's with her family in Manali and extended the celebrations with a cosy lunch date with her sister Rangoli, husband Ajay Chandel and their son Prithvi Raj. Rangoli shared pictures of the four 'chilling together in Manali.' Maasi Kangana is Prithvi's favourite for sure as the toddler happily sat in her lap and played with her glass of wine. Of course, Kangana pampered her nephew happily. Rangoli, who is also Kangana's manager, also shared a picture of herself with her sister and wrote: "Hope we all rise and shine!! Cheers to 2019."

When roads are jammed, it's samosa party at home!! #ringinginnewyeras #2019 #Mountainlife# Happy new year everyone pic.twitter.com/e6MmkONTWo

On the work front, Kangana Ranaut is awaiting the release of Manikarnika: The Queen of Jhansi, which opens in cinemas on January 25. Kangana plays the role of Rani Laxmi Bai, counted among the first freedom fighters of India, who stood against the East India Company after they planned to usurp Jhansi from her after her husband's death.

Kangana Ranaut is co-producing the film with Kamal Jain and she has also directed parts of the period piece. The film's primary director is Krish. Manikarnika: The Queen of Jhansialso stars Ankita Lokhande, Atul Kulkarni, Jisshu Sengupta and Danny Denzongpa.