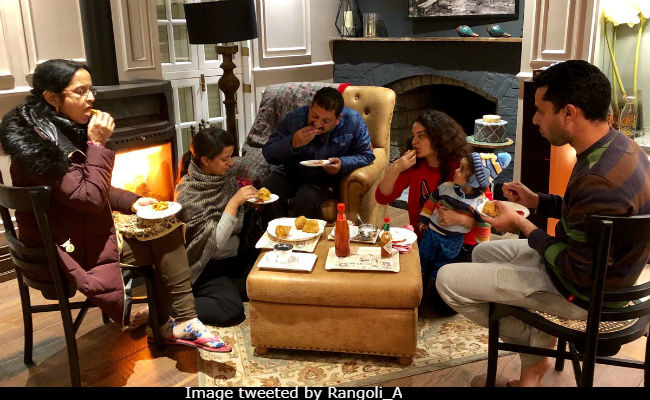 Inside Kangana's New Year get together (courtesy Rangoli_A)

You will not spot Kangana Ranaut letting her hair down at a party on New Year's eve because the Manikarnika actress has packed her bags and landed in Manali, where she owns a swanky cottage on the hills. Kangana is celebrating New Years with her family and her sister Rangoli shared a picture from inside the family-only get together in the hills. In the photo, Kangana and Rangoli can be seen enjoying plateful of samosas. Kangana's nephew little Prithvi Raj can be seen plonked on Kangana's lap while she enjoys a snack with her family in what appears to be the living room. We also get a glimpse of the luxurious interiors of Kangana's Manali abode, which had hit the headlines earlier. And here's how Rangoli captioned the photo: "When roads are jammed, its samosa party at home! #ringinginnewyeras #2019 #Mountainlife# Happy new year everyone," she wrote.

When roads are jammed, it's samosa party at home!! #ringinginnewyeras #2019 #Mountainlife# Happy new year everyone pic.twitter.com/e6MmkONTWo

Kangana, who arrived in Manali days ahead of the New Years, was part of a "cooking competition" at home. Here's some gajar ka halwa in the making.

Lighting diyas, my fav time of the festival !! pic.twitter.com/t9oF1bjDQD

Meanwhile, here's a look at Kangana Ranaut's plush new Manali apartment, which made headlines headlines for its spectacular view and charming interiors. Speaking to Architectural Digest previously, Kangana described the feel of the house as: "I thought this would be a retreat but it's the ultimate party house." Kangana's Manali home is the perfect blend of old school cottage and modern amenities, the first pictures of which were shared on Architectural Digest's May - June issue in 2018.

On the work front, Kangana Ranaut is looking forward to Manikarnika: The Queen Of Jhansi, in which she plays the titular role. Co-directed by Krish and Kangana, the film hits screens on January 25. Kangana also has films such as Mental Hai Kya and Panga in the line-up.