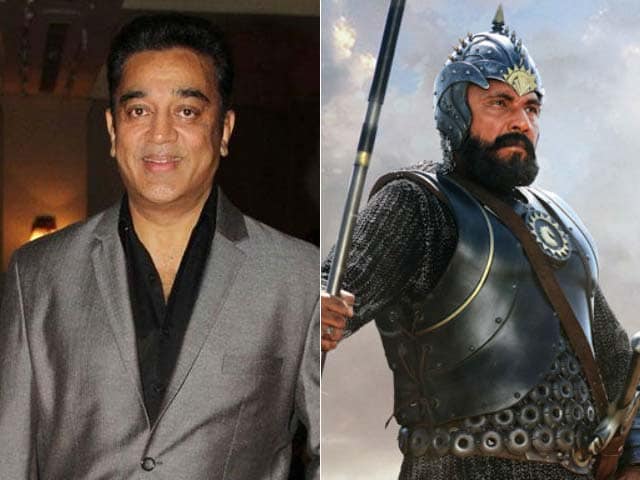 Kamal Haasan and Sathyaraj have co-starred in several films

New Delhi: Kamal Haasan has praised his former co-star and Baahubali actor Sathyaraj, who apologised for the comments he made during the Cauvery water row several years ago. "Congrats Mr. Sathyaraj for maintaining rationality in a troubled environment," he tweeted. Sathyaraj, 62, plays the role of Katappa in SS Rajamouli's epic fantasy Baahubali. Pro-Kannada organisations had threatened to ban Baahubali: The Conclusion's release across the state until Sathyaraj apologised for his comments. Sathyaraj, through a video, apologised for the comments made and said, "I'm not against Kannadigas. I'm sorry if my words hurt you. I'm a small player in Baahubali, my words shouldn't affect the film."

Baahubali: The Conclusion, part 2 of Rajamouli's magnum opus, is scheduled to hit the screens on April 28. The pro-Kannada organisations had also called for a Bengaluru bandh on the film's release.

Promoted
Listen to the latest songs, only on JioSaavn.com
Following Sathyaraj's apology, the pro-Kannada organisations withdrew their protest. Vatal Nagraj, president of Kannada Chalavali Vatal, while addressing the media in Bengaluru on Saturday said, "We are warning Sathyaraj to be careful about what kind of words he should use. Let him support Tamil Nadu but he shouldn't speak against Kannadigas. Ensure you don't use derogatory terms against Kannadigas henceforth. If you do so, all your future movies will be banned in Karnataka."

Baahubali: The Conclusion, is the one of the most-anticipated films of this year.Baahubali series stars Prabhas, Rana Daggubati, Anushka Shetty, Tamannaah Bhatia and Ramya Krishna. Baahubali: The Beginning released to a blockbuster status in 2015 and is one of the most profitable films so far. Part 2 is expected to reveal why Katappa killed Baahubali (Prabhas).