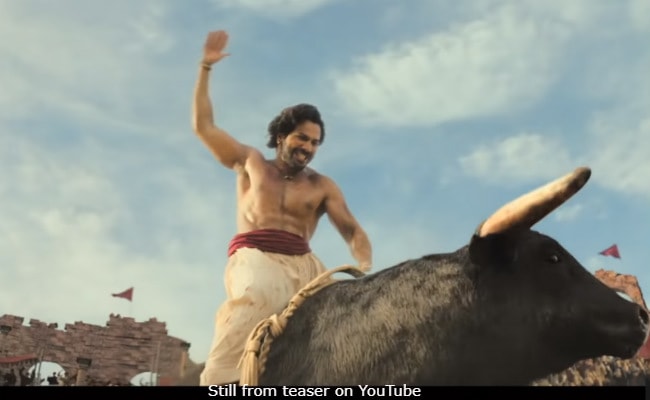 The Kalank teaser released on Tuesday and took us back by several years with its grand and majestic glimpses of the drama that is set in the pre-independence era of 1945. Now, Twitter is of the opinion that Kalank appears to be inspired by the grandeur and larger-than-life make of Baahubali and those who have watched the teaser, can't completely disagree. "Bollywood's Baahubali," tweeted one user while another added: "Wow amazing visuals. Especially the last scene with raavan. This visuals can directly compete with Baahubali." Karan Johar's Dharma Productions, which is producing Kalank, was in charge of distributing the Hindi version of the Baahubali series of films.

Wow amazing visuals. Especially the last scene with ravan. This visuals can directly compete with bahubali. @Varun_dvn at his best. #KalankTeaser#Kalank@karanjohar

Here's just a glimpse of Twitter's reaction to the Kalank teaser.

A mixture of Padmavat, Bhajirao Mastaani and Bahubali... looking forward to the Movie https://t.co/89NxsAfy3S

Karan johar takes #Baahubali, #Devdas & #Padmavat ,mixes them all up & volia! Here is the teaser of #Kalankhttps://t.co/2W3rT928qz#MadhuriDixit#SunjayDutt#VarunDhavan#AliaBhatt#SonakshiSinha

Just one word for this....."EPIC"....great to see that post Baahubali....Bollywood has finally decided to make movies on epic scale.....return of the multi starer movies #Kalank#KalankTeaserhttps://t.co/nPpHxajg7v

The teaser of #Kalank looks EPIC... This film is going to be sure shot BLOCKBUSTER. @Varun_dvn shines out @aliaa08 dialogues. Eagerly waiting to see #AdityaRoyKapur after long time.
Film has some vibes of #Devdas & #Baahubalihttps://t.co/p9MMAIY15N

Directed by Abhishek Verman, Kalank is a period film that was conceptualised by Karan Johar some 15 years ago. The ensemble cast of the film comprises Alia Bhatt, Varun Dhawan, Sonakshi Sinha, Aditya Roy Kapur along with Madhuri Dixit and Sanjay Dutt, who are reuniting on the big screen after two decades.

Kalank is a tale of love with Alia Bhatt's Roop and Varun Dhawan's Zafar at the epicentre of the story. Watch the teaser of Kalank here:

Kalank is all set to hit screens on April 19.