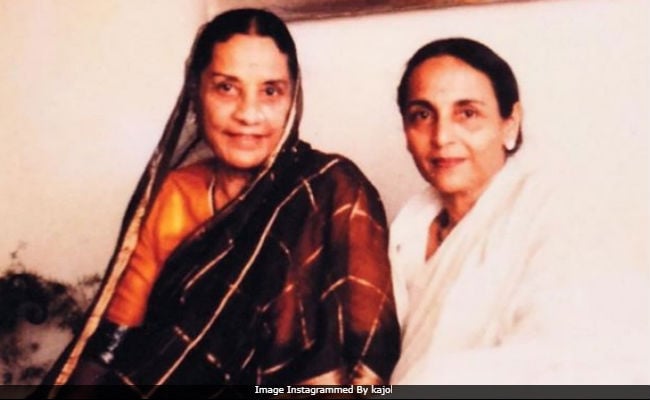 New Delhi: Kajol, daughter of veteran actress Tanuja, posted an old picture of her grandmother Shobhna Samarth and great grandmother Rattan Bai and captioned it as, "My great-grandmother and my grandmother ... aji! Two women who taught me about what feminism actually means without ever discussing it." She has also tagged her sister Tanishaa and cousins Mayuri Garware and Madhura Samarth in the picture. Rattan Bai was a singer and had also acted in films. She was in her 40s when she made her film debut. She entered the industry at a time when the career option wasn't considered a respectable one. Her daughter Shobhna Samarth worked as an actress in Marathi and Hindi film industry. She debuted in 1935. Ms Samarth was the first Indian actress to wear a swimsuit on screen. Being a top actress, she directed two movies and also launched her daughters Nutan and Tanuja in the industry.

In 1997, Shobhna Samarth was given a Filmfare Special Award for her contribution to arts. Now, four generations of the Samarth family have been a part of the industry.

My great grand mother and my grandmother ... aji! Two women who taught me about what feminism actually means without ever discussing it .

Last year, Kajol had shared a picture with Shobhna Samarth and mom Tanuja from the muhurat of Bekhudi, her first film.

#tbt my muhurat of Bekhudi at RK studios, 26 years back!

Kajol was born to Tanuja and filmmaker Shomu Mukherjee in 1974. She made her acting debut in the 1992. Kajol, 43, is the star of hit films such as Baazigar, Dilwale Dulhania Le Jayenge, Kuch Kuch Hota Hai, Fanaa and My Name Is Khan. Her sister Tanishaa is also an actress.

Promoted
Listen to the latest songs, only on JioSaavn.com
Kajol is married to actor Ajay Devgn since 1999 and the couple are parents to daughter Nysa and son Yug. Nysa is finishing school in Singapore while Yug studies in Mumbai.

Ajay Devgn's next film Raid releases this Friday. Kajol was last seen in 2017's Tamil film VIP 2, co-starring Dhanush. Dilwale, opposite Shah Rukh Khan, which released in 2015, was her last Bollywood film. Kajol's next film is Eela, directed by Pradeep Sarkar and produced by Ajay Devgn.