Kajol's Birthday Wish For Son Yug Came Gift-Wrapped Like This

"Miss you more than I can say," wrote Kajol 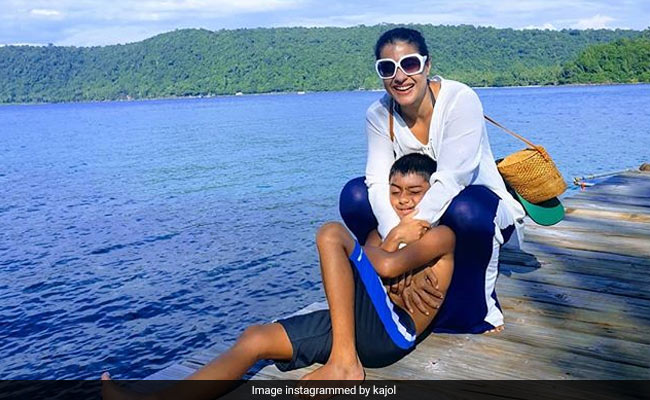 Kajol, who is reportedly staying in Singapore with her daughter Nysa as her school reopened, sent best wishes to her son Yug on his 10th birthday from the island city. Kajol posted a video of Yug making a splash in a pool and expressed how much she is missing him in a sweet birthday note. She wrote: "'I know nothing, I know everything' - Yug Devgn. Happy 10th birthday to my little Buddha. Miss you more than I can say." Kajol will reportedly stay with Nysa in Singapore for the next few months but more on that later. Check out her post for Yug Devgn here.

"I know nothing I know everything "- Yug Devgan Happy 10th birthday to my little Buddha . Miss u more than I can say.

Ajay Devgn also shared a heart-warming birthday post for his son. "Working towards a Green tomorrow. Cannot ask for more. Happy birthday, Yug. And, lots more to come," he wrote while sharing a couple of photos of the birthday boy.

Kajol reportedly flew to Singapore earlier this month after school and colleges reopened there. Nysa started school in Singapore sometime in 2018. Mumbai Mirror quoted a source as saying: "Nysa is studying at United World College of South East Asia in Singapore and Kajol and Ajay don't want their daughter to miss out on studies. At the same time, they don't want her to be alone in a foreign country in the midst of an ongoing pandemic, which is why Kajol accompanied her there. She will be staying in Singapore for the next few months."

Kajol and Ajay Devgn got married in the year 1999. Nysa was born to them in the year 2003. The couple welcomed their son Yug in 2010. Ajay Devgn and Kajol have co-starred in several films, that include the 1994 film Gundaraj, the 1997 film Ishq, 1998's Pyar To Hona Hi Tha, 1999's Dil Kya Kare and Raju Chacha among others. They were last seen together in Ajay's film Tanhaji: The Unsung Warrior.