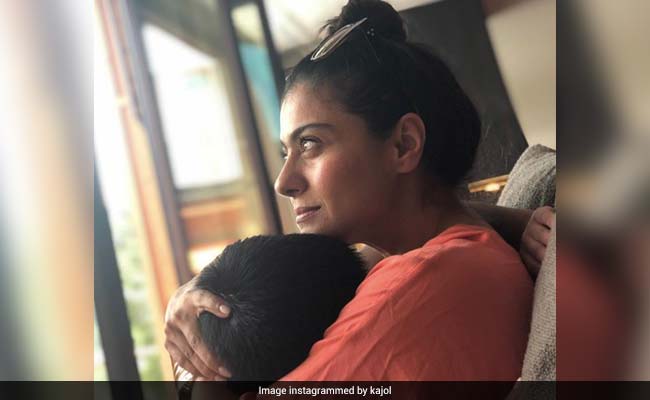 Ahead of her son Yug Devgn's 9th birthday (September 13), Kajol shared an absolutely adorable post on her Instagram profile, on Wednesday night. If the pre-birthday post is so cute, we can't imagine how adorable the birthday post will be (can't wait). In the picture, Kajol can be seen smiling as little Yug sits curled up in her arms. The thing that caught out attention the most - is Kajol's priceless expression in the photograph. The 45-year-old actress, dressed in a coral outfit looks beautiful sans make-up. Kajol captioned the post: "Birthday week starts ..." Kajol shared the picture with her 8.5 million fans on Instagram, of which over 2 lakh fans have liked it. Kajol's sister Tanishaa Mukerji commented "Yay" on the post.

Kajol and Ajay Devgn got married in the year 1999. Other than Yug, the couple are parents to 16-year-old daughter named Nysa. Ajay Devgn and Kajol have co-starred in several films, that include the 1994 film Gundaraj, the 1997 film Ishq, 1998's Pyar To Hona Hi Tha, 1999's Dil Kya Kare and Raju Chacha among others. They will next be seen together in Ajay's forthcoming film Taanaji: The Unsung Warrior.

On the work front, Kajol was last seen in the 2018 film Helicopter Eela while the 2019 release De De Pyaar De was Ajay Devgn's last film.