Karan Johar shared a series of pictures on social media which highlight the most important relationships in his life. One of the pictures features him with actors Shah Rukh Khan and Kajol. The picture seems to be taken while they were shooting for My Name Is Khan. It has been captioned as, "Lifetime bonds!!!!" 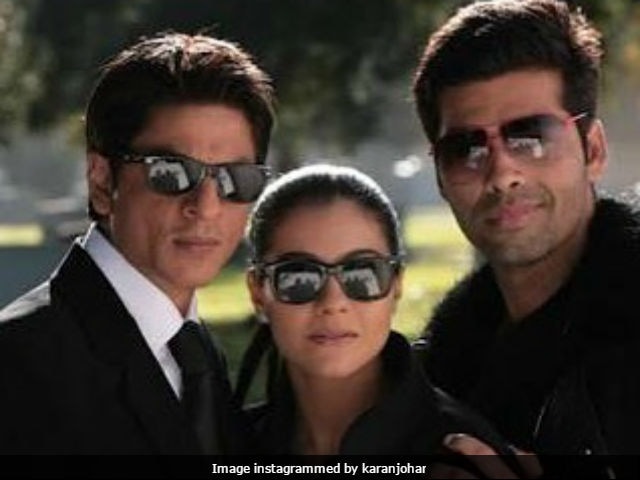 New Delhi: Karan Johar is on a nostalgia spree. The 45-year-old filmmaker shared a series of pictures on social media which highlight the most important relationships in his life. There is one that stands out for us amongst all. It is the one in which Karan Johar is seen posing with his best friend Shah Rukh Khan and Kajol. The picture appears to be taken while they were shooting for 2010 movie My Name Is Khan. KJo, SRK and Kajol are seen dressed in black outfits, wearing their sunglasses and posing for the camera. "Lifetime bonds!!!!," wrote Karan Johar. See the picture shared by him here:

Well, we all know that KJo and Kajol recently patched up after their infamous fight last year. According to a report in Filmfare, it was the 43-year-old actress extended an olive branch and invited Karan Johar to her birthday party and he showed up. The duo hugged and everything was normal again with no melodrama or conversation, reported Filmfare.

Remember how Karan Johar, in his autobiography The Unsuitable Boy, revealed that his friendship with Kajol had soured over the last few years and how she 'could never come back' into his life. Well, that seems to be forgotten now. Earlier this month, Karan Johar and Kajol became friends on social media too. On Raksha Bandhan, Karan Johar shared a picture of his twins - Yash and Roohi on Instagram and among the many celebrities who 'liked' Karan Johar's post, Kajol's name popped up.

Kajol and Karan Johar were close friends for 25 years before their fight. The duo made films like Kuch Kuch Hota Hai and Kabhi Khushi Kabhie Gham together. Last year, Karan Johar blamed Kajol's husband Ajay Devgn for the rift between him and the actress. Ahead of Shivaay's release, the 48-year-old actor accused Karan Johar of paying for favourable reviews of his film Ae Dil Hai Mushkil, which released at the box office on the same date as his directorial debut.

Karan Johar also shared yet another picture of his twins, Roohi and Yash, on social media today. In the collage shared by him, Roohi and Yash are seen staring into the camera and smiling. The image has been captioned as, "My world 2.0."

KJo shared a picture featuring his parents Yash and Hiroo Johar along with filmmaker Yash Chopra and his wife Pamela. "The two lovely ladies Pam aunty and mom with their respective YASHs," he wrote.

With my best friend Adi and God child Aryan! God!! How time flies!!!!! This was 18 years ago

Karan shared a picture of his 'students' Alia Bhatt, Varun Dhawan and Sidharth Malhotra. The picture appears to be taken during the promotions of the actors debut film Student of the Year, which was directed by KJo.

Promoted
Listen to the latest songs, only on JioSaavn.com
See the other pictures shared by Karan Johar here:

My 40th birthday! @manishmalhotra05 made it special!!