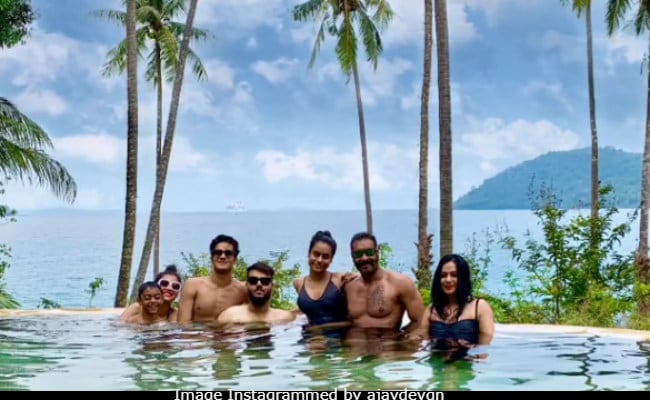 The Devgns, who were spotted flying out of Mumbai earlier this week, just featured on Ajay Devgn's vacation post, which will make you go green with envy. A day after Christmas, Ajay Devgn Instagrammed a sneak peek of how much fun he's having with wife Kajol and children Nysa and Yug on the vacay at an undisclosed location. In the post, Ajay Devgn, Kajol, Nysa and Yug feature with other family members and friends. The Devgns pose for a click from inside an infinity pool with the sea, the clear blue sky and the mountains in the backdrop. "Somewhere in between Christmas and New Year," read Ajay Devgn's Instagram post.

Here's what Kajol and Ajay Devgn's family vacation looks like:

Somewhere in between Christmas & New Year

Meanwhile, Kajol had also sent a Christmas greeting to her Instafam with an adorable vacation photo. "A very merry Christmas to all," she captioned her Christmas photo.

Ajay Devgn, who was described as a social recluse by wife Kajol on a recent episode of Koffee With Karan, often features on family vacation posts on Instagram. Here are a few from their Paris vacation.

Ajay Devgn and Kajol recently trended a great deal after their hilarious episode of Koffee With Karan, on which, the 49-year-old actor trolled his wife incessantly.

On the work front, Ajay Devgn is all set to make an appearance in his Singham persona in Friday release Simmba, starring Ranveer Singh and Sara Ali Khan. Ajay Devgn also has films such as Total Dhamaal and Taanaji in the pipeline. Kajol's last film was Helicopter Eela, which released earlier this year.