Kajol shared pictures from her last day in Paris, one of which also featured Ajay Devgn, Nysa and Yug 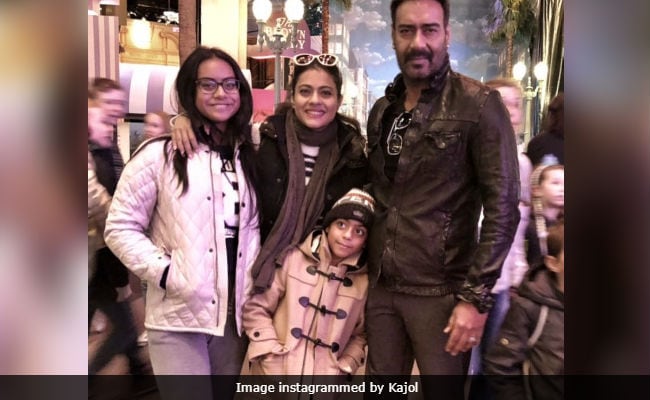 Kajol and Ajay Devgn photographed with their kids in Paris. (Image courtesy: Kajol)

New Delhi: The very stylish Devgns bid adieu to Paris on Monday. Kajol posted a picture of her family posing on a busy Paris street saying: "Au revoir..... Paris!" Kajol, Ajay Devgn and their children Nysa, 15 and seven-year-old Yug arrived in Paris last week in time to celebrate the Shivaay actor's birthday. In the photo Kajol instagrammed on Monday, the family of four were dressed in their winter best - such a cool jacket, Yug. After a week-long family vacation, the Devgns will now disperse and get busy with their respective commitments - Kajol has to start filming Eela, which is produced by Ajay Devgn. The actor will also get busy making Taanaji: The Unsung Warrior and Total Dhamaal. Nysa will return to Singapore, where she's completing her higher education while Yug will be in Mumbai with his parents.

Take a look at the Devgns' last day in Paris:

Kajol and Ajay Devgn shared very few pictures of their trip on social media - the family is kind of private that way - but we loved this photo of Yug pulling off a neat emotional blackmail trick on his parents for a bag of candies.

Promoted
Listen to the latest songs, only on JioSaavn.com
On their vacation, Ajay Devgn and Kajol also bumped into actor couple Vatsal Sheth and Ishita Dutta. Ajay Devgn has worked with both the actors in separate films - with Vatsal in Tarzan: The Wonder Car and with Ishita in Drishyam.