"Just The Two Of Us," Writes Shibani Dandekar In Her Latest Post. No, It's Not For Farhan Akhtar 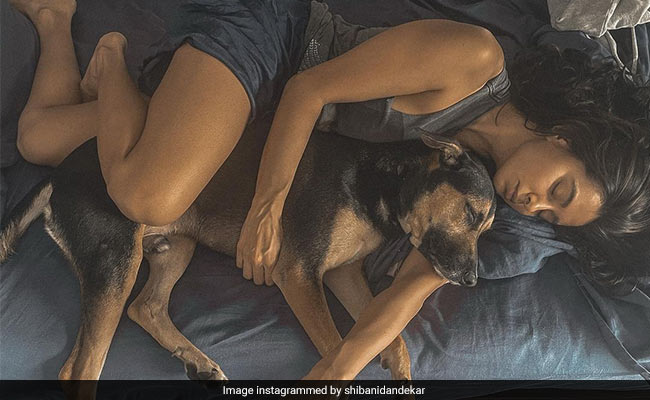 Shibani Dandekar has the most amazing cuddle buddy. The model-actress dedicated her recent Instagram post to her cuddle partner and no, it is not her boyfriend and actor Farhan Akhtar. The special one is none other than Shibani's pet dog Tyson who made a cute feature in her Instagram post and melted a lot of hearts on Tuesday. In the picture that she shared on Instagram, Shibani can be seen cuddling with her furry friend. Both Shibani and her pooch can be seen in deep sleep in the picture. Expressing her love for her dog, Shibani wrote: "Just the two of us.. you and I #myjimjam."

In the picture, Shibani can be seen dressed in comfy casuals. She can be seen wearing a grey tank top with a matching pair of shorts. The adorable post received a lot of love from Shibani's Instafam. Actress Amrita Arora dropped heart emojis in the comments section of the post. This is not the first time that Shibani's dog has featured in her Instgram post. She keeps sharing several pictures and hilarious videos of herself with her pet.

Earlier last week, Shibani shared an Instagram vs Reality post, in which she shared a behind the scene moment from her workout sessions. In the picture, Shibani can be seen lying on the mat with her hands on her waist. She aimed to shatter the Instagram hype of workout through her post. Shibani's boyfriend Farhan reacted to the post by dropping a ROFL comment.

In term of work, Shibani has been a part of several reality shows like Khatron Ke Khiladi and Jhalak Dikhlaja. She has appeared in films like Bhavesh Joshi, Roy, Shaandaar and Naam Shabana. Her last on-screen appearance was in the second season of web-show Four More Shots Please!