Farhan Akhtar and Shibani Dandekar can be seen twinning in black 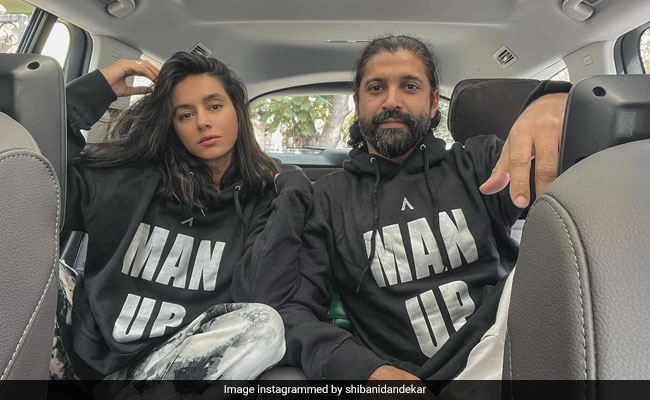 Shibani Dandekar and Farhan Akhtar are setting all sorts of goals in the actress' latest Instagram entry. On Sunday afternoon, Shibani Dandekar shared a picture with boyfriend Farhan Akhtar on her Instagram profile. In the picture, the couple can be seen twinning in black outfits from the shelves of the brand Man Up Woman Up - by Shibani's sister and VJ Anusha Dandekar. Shibani captioned the picture: "Happy #3 Farhan Akhtar." In the comments section of her sister's post, Anusha wrote: "OMG I love this look, I love you guys! Happy 3! Thank you for spending it in Man Up Woman Up #imdead."

Farhan Akhtar and Shibani Dandekar  frequently feature on each other's Instagram profiles. On Valentine's Day, Shibani posted this super cute picture with Farhan and she captioned it: "My forever Foo," adding a heart emoji to it.

Shibani Dandekar and Farhan Akhtar started dating in 2018. The actor was earlier married to celebrity hairstylist Adhuna Bhabani, with whom he has two daughters - Shakya and Akira. Farhan Akhtar's next project is the sports film Toofan, which will be directed by Rakeysh Omprakash Mehra. The actor was last seen in the 2019 film The Sky Is Pink, co-starring Priyanka Chopra and Zaira Wasim.