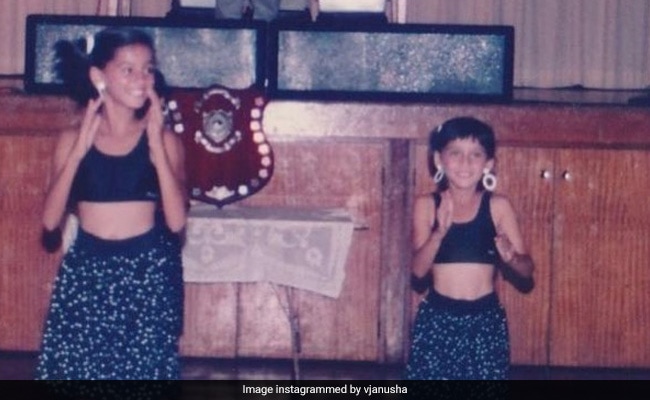 Shibani and Anusha Dandekar have been secretly copying each other since childhood and the latter's post on Instagram proves it. On Wednesday, Anusha, who is a VJ and an actress, picked a million-dollar throwback picture of herself and her sister Shibani Dandekar from their childhood and shared it on social media with a super cool caption. The duo can be seen dancing on a stage in the old photo. "Always copied my big sis... still do secretly sometimes...The best is when she secretly copies me now and thinks I'm cool! Shibani Dandekar. (And before ya'll start, yes she's older, I'm just taller now ok!) Also, just in case we forget our spots on the dance floor, they drew them for us... hahaha soo cute! PS - Our Mum thought it best if she was our hairdresser," wrote Anusha Dandekar in the caption, which is winning the Internet.

Reacting to her sister's post, Shibani Dandekar, who is a singer, actress and model, commented: "I'm younger, taller and a better dancer. Love you."

Anusha and Shibani's boyfriend, actor Farhan Akhtar, share their birthdays on January 9. See what Anusha posted for the actor:

Shibani Dandekar has participated in reality shows such as Khatron Ke Khiladi and Jhalak Dikhla Jaa. She has hosted Indian Premiere League and was last seen in the second season of Amazon Prime Video's web-series Four More Shots Please! Season 2.

Anusha Dandekar was last seen as a judge on the show Supermodel Of the Year.

Inside Alanna Panday And Boyfriend Ivor's Date In Maldives