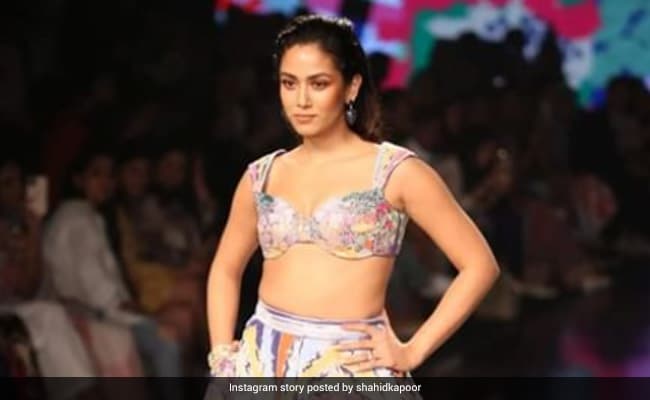 And, the award for the best husband goes to Shahid Kapoor. The actor doesn't need a day to give a shout out to his wife, Mira Rajput. And, his latest upload is proof. It screams love from miles away. Shahid has shared Mira Rajput's picture from the ongoing Lakme Fashion Week on Instagram Stories. Mira walked the ramp for designer Aisha Rao. And, Shahid couldn't help but call his beloved wife a ‘stunner”.He has also added a pink heart emoji.  Can it get any cuter? We think not.

Mira Rajput has also shared pictures from her look for the evening. Applauding Aisha Rao's creation, Mira said, “Rooted and traditional but with a splash of fun is true millennial style brought to life beautifully by Aisha Rao in her exquisite collection - Divergence.”

Coming back to Shahid Kapoor and Mira Rajput who often give us major couple goals. And, according to Shahid, Mira is married to her phone. The actor has shared a clip recorded inside the car. Here, Shahid is looking at the camera with a sad face as Mira seems deeply engrossed in her phone. For the caption, Shahid wrote, “Married to the phone, Mira Rajput.” Well, Mira didn't miss the video update on Instagram. She wrote, “Get married to the couch now.”

This isn't the only time when Shahid Kapoor has made fun of Mira Rajput on social media. Here again, Shahid has spoken about Mira's “first love”. Yes, the phone. He wrote, “Her first love is what she is staring at. But I am ok being her second love also. . What to do. . Love is like that only.”

And, then Shahid Kapoor called Mira Rajput a “legend”.

Shahid Kapoor and Mira Rajput got married in 2015. The couple has two children - Misha and Zyan.

Shahid Kapoor will be next seen in Jersey. The sports drama is directed by Gowtam Tinnanuri. The film is a Hindi remake of the Telugu movie of the same name. It featured Nani. Jersey also stars veteran actor Pankaj Kapur and Mrunal Thakur in crucial roles.