Tiger Shroff posed with Ganapath producer Jackky Bhagnani for some photos in the snow. 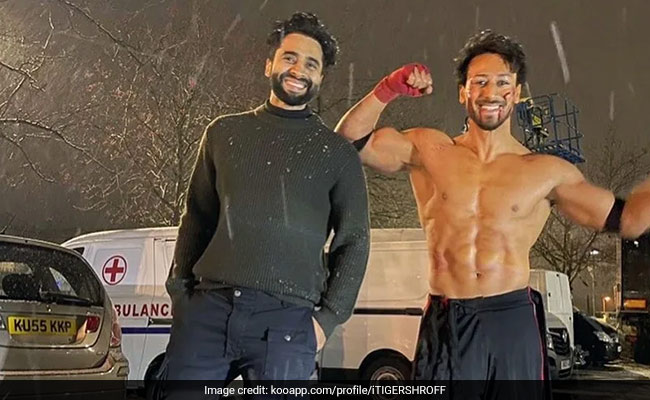 Want to enjoy the snow with no shirt on? Well, Tiger Shroff is ready for it. Feeling the chills already? But the Bollywood actor isn't at all bogged down by a cold winter. He is out in the open, wearing just a pair of trousers and embracing a snowfall. How do we know? The actor himself posted photos of this adventure on social media. Tiger Shroff is standing shirtless under the snowfall during Ganapath shoot. The actor has shared the frame with the film's producer, Jackky Bhagnani. Tiger Shroff captioned the photos, "Literally chilling with my Bossman aka Producer Saab aka Bro."

While the actor is busy at the shoot, he steals away some time to enjoy the cold weather. Tiger Shroff recently tried ice skating. In the video, we see him skating gracefully and we can hardly find faults with his skating style. But you know what? It was his first time at the ice rink. Unbelievable, right? We gasped for air when he blazed on the decorated ice rink in his black jacket. Tiger Shroff, in his caption, wrote, "Not bad for my first time on the ice." Take a look at his video:

Tiger Shroff has been busy with the shoot of Ganapath in the UK. And, we are getting to see behind the scene moments through his social media updates. Tiger Shroff  is one of the fittest actors in Bollywood and his fans can't stop gushing about his action sequences. Demystifying his stunts, the actor often shares his rehearsals videos at the gym. In one such clip, he is spinning in the air and landing kicks on his instructor. And, he accidentally kicked his trainer too. The actor captioned the video, "When action rehearsals go wrong" and added wise monkey emojis.

Ganapath is raising high hopes and it's not just Tiger Shroff's stunts that are keeping us on the edge of our seats. Kriti Sanon is the female lead in this film. Recently, she joined the crew in the UK. Tiger Shroff shared her first look and welcomed her on the sets. The video shows Kriti in a sporty look with a bike. Tiger Shroff captioned the video, "Time for some more action, more dhamaka. Welcoming my leading lady, Jassi, as she begins the UK schedule of Ganapath. Can't wait to reunite with you, Kriti Sanon."

Tiger Shroff made his Bollywood debut alongside Kriti Sanon with Heropanti. He rose to fame with films like Baaghi, A Flying Jatt, Munna Michael and War.

When Rajkummar Rao Sang Maeri For Patralekhaa. See His Post