Rubina Dilaik And Fam "Tried Copying" BTS And We Are Sold

Rubina Dilaik revealed that it took 10 rehearsals, 20 goof-ups and 30 retakes to get the video right 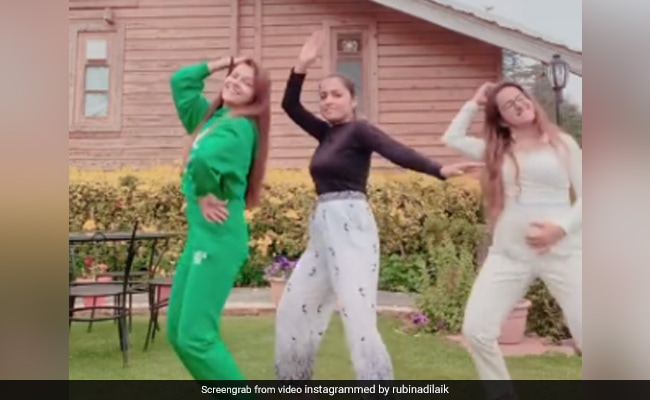 Rubina Dilaik in a still from the video. (courtesy rubinadilaik)

Rubina Dilaik seems to be a die-hard fan of the K-pop music band BTS. The actress shared a goofy video where she grooved to the viral TikTok song Aye Rico Rico.  The Bigg Boss 14 winner, along with sister Jyoti and others, aced this trendy track the BTS way.  “Rehearsed 10 times, goofed up 20 times, retakes 30 times and now laughing out, looking at myself...By the way, I tried copying BTS,” Rubina's caption read. The video compilation on Alo Michael's number was a treat to her Insta fam.

BTS or Bangtan Boys is a popular seven-member South Korean band. RM, Jin, Suga, J-Hope, RM, Jimin, V and Jungkook have a massive global fanbase. Dynamite, Savage Love and Life Goes On are some of their recent chartbuster songs. The septet's version of Aye Rico Rico went viral on the Internet due to their uninhibited performance. Rubina took some inspiration from the group and mimicked their steps with her co-dancers. The musical upload by the actress has garnered over 2 lakh likes overnight. Some of the comments on this Rubina-BTS crossover went as “fabulous”, “lovely” and “amazing.”

Rubina loves to stay updated with the latest social media trends. A while back, the Chotti Bahu actress tried another viral TikTok song Nuevos Bailes y Tendencias. She made a glamorous appearance in this Instagram Reels in a white and pink saree.

Remember the fiery Internet trend, “Don't Rush” challenge? Rubina Dilaik took it up in her own funny way. The actress, in a black outfit, took the words “don't rush” way too seriously. Surprisingly, she did not dance on the popular hook step of this number.

Another time Rubina went out of the way to ace a trend was when she grooved to the choreography of Volac, illusionize and Andre Longo's song In A Club. The TV star practiced on the track for two days.

So which one is your favourite?