Rubina Dilaik Had A Reunion After 8 Months With...

The actress has recently recovered from a bout of coronavirus 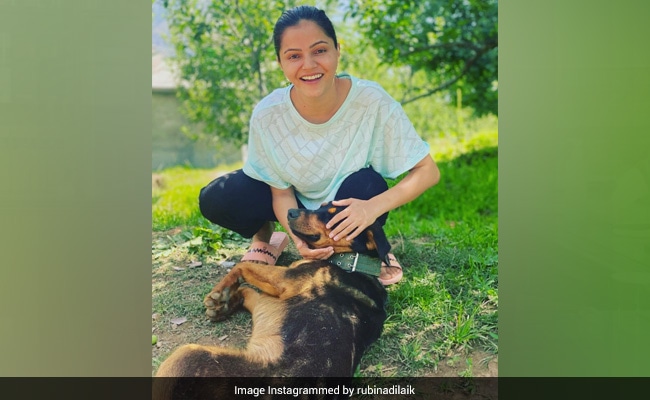 Actress Rubina Dilaik has had a rollercoaster of a year, so far. Following a win in the latest season of Bigg Boss, she was ready to hit the sets of her television show Shakti-Astitva Ke Ehsaas Ki. However, the actress tested positive for COVID-19 and was quarantined at her family home in Shimla. Rubina, who recovered recently, shared a photo with her pet dog, whom she met after eight months. In the snap, the 33-year-old is seen playing with her furry friend. “Happiness is reuniting with my little boy Leo after 8 months,” read the caption. Rubina's fans were elated to see the actress in a happy mood and filled the comment section with positive messages. One user wrote, “Boss lady and Leo.” Another said, “Sooo adorable.”

Leo has a dedicated Instagram page, where he is often seen with Rubina and her husband, actor Abhinav Shukla. The reunion moment was also shared on the pet's page with a heartwarming picture. “Meeting mama after 8 months, Rubina Dilaik. We are missing you a lot, Abhinav Shukla,” the caption read.

Recently, the actress shared a video on the ‘power of positivity', inspiring her fans to remain hopeful in these trying times. The video which documented her COVID-19 diagnosis and recovery gave fans a detailed look at how she battled the virus. “2020-21 has been by far the most difficult time that our generation is going through. As I was lying in bed, covid-ridden and scrolling through my social media, the enormity of the situation was weighing down on me,” Rubina wrote.

She added, “But, there is something else that I noticed too. And that is what I want to focus on from now on. I feel so blessed to be in this world full of such good human beings doing such good work for our community. Here goes my bit to add to their good work. Let's carry on with this - power of positivity.”

Rubina made her acting debut in 2008 in the hit television series Choti Bahu. She married actor Abhinav Shukla in 2018. He is currently shooting for the reality show Khatron Ke Khiladi 11 in Cape Town, South Africa.