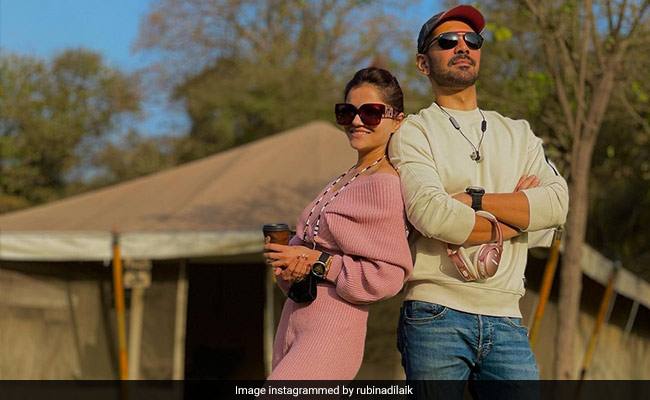 Hush, hush! Do not tell Suchitra Iyer Tiwari or Suchi, as Srikant Tiwari (played by Manoj Bajpayee) lovingly calls her, about Bigg Boss 14 contestant Abhinav Shukla's recent tweet - consider it a request from the family man himself. Confused? Don't be, we are here to help. Bigg Boss 14 winner Rubina Dilaik can't keep calm after watching the trailer of The Family Man 2. The Shakti actress has "officially entered the #WantFamilyManNow zone." She even demanded the show to be released soon. "Jaldi le aao show yaar, can't wait anymore," she tweeted. Rubina's husband Abhinav Shukla, being the perfect family man that he is, tagged Amazon Prime Video (on which the series airs) and wrote: "Biwi ki demand please puri kardo Prime video. We both want The Family Man now, now, now." Well, it doesn't just end there, Manoj Bajpayee, who plays the lead in the show, replied to Abhinav's tweet and wrote: "Please Suchi ko yeh ideal pati ka tweet mat dikhana otherwise she will call me to say #WantFamilyManNow."

You have to check out the tweets:

Manoj Bajpayee's tweet was with reference to the character he plays in the show - Srikant Tiwari, who has a tough time striking a balance between devoting time to his loved ones and his undercover job, which he loves by all means. The second season of the show will mark Telugu star Samantha Ruth Prabhu's web debut. It is also her first Hindi project. She has been cast as the main antagonist - a terrorist named Raji. The Family Man 2, which was initially supposed to be on air in February, was shifted to March. It will finally premiere on Amazon Prime on June 4.

TV stars Rubina Dilaik and Abhinav Shukla  got married in Shimla (her hometown) in June 2018. They later hosted a reception for their friends from the TV industry. They participated together in the TV reality show Bigg Boss 14, in which Rubina was the winner. Abhinav is currently shooting for Khatron Ke Khiladi in Cape Town, while Rubina is in her hometown Shimla. She recently recovered from COVID-19.