"Both the Saathiyaas on either side," wrote AR Rahman 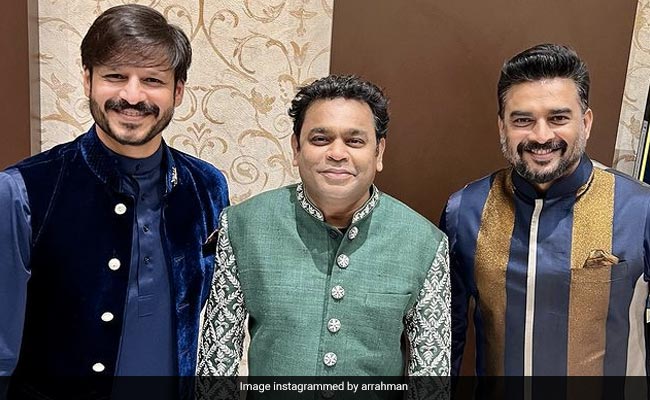 It was a reunion of sorts for AR Rahman, Madhavan and Vivek Oberoi. The actors and the composer-singer attended an event together and they didn't forget to document it for their Instafam. AR Rahman, who composed the music for the Tamil film Alaipayuthey, starring Madhavan and its Hindi remake Saathiya, featuring Vivek Oberoi, shared the picture with both the actors on his Instagram profile and he captioned it: "At the inauguration of Indian pavilion.#expo2020. Both the Saathiyaas on either side." In the comments section of AR Rahman's post, Madhavan wrote: "So very lovely meeting you again ... It's been exactly one and a half years since we met right before the Covid lockdown started. To happier days."

On his Instagram story, Madhavan shared a picture from the event and he captioned it: "With the maestro who did both our films Alaipayuthey and Saathiya."

In terms of work, Madhavan will next be seen in Rocketry: The Nambi Effect. The actor was last seen in Maara. Madhavan has featured in Hindi, Tamil, Kannada, Telugu and English films. His well-known Bollywood films include 3 idiots, Rang De Basanti, 13 B, Tanu Weds Manu, Guru, Rehnaa Hai Terre Dil Mein and Zero to name a few.

AR Rahman's list of awards includes six National Awards and several Filmfare Awards from across Bollywood and the South film industry. He was honoured with the Padma Shri in 2000 and Padma Bhushan in 2010 for his contribution to Indian music and cinema. AR Rahman's Grammy wins were two more trophies added to his awards legacy, headlined by the Academy Awards - he won two Oscars for Slumdog Millionaire in 2009.