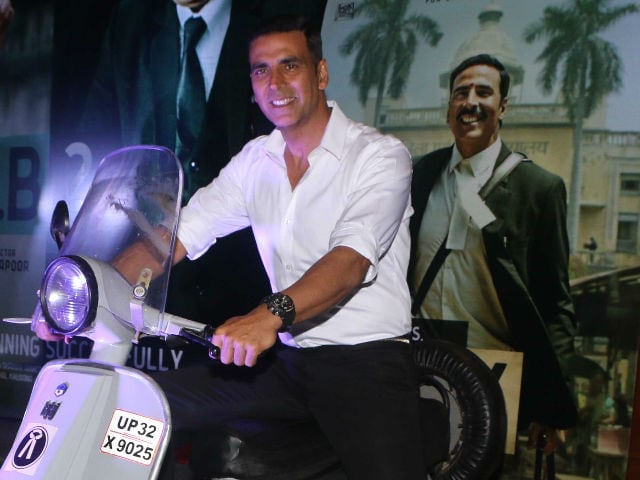 New Delhi: Actor Akshay Kumar's latest film Jolly LLB 2crossed the coveted Rs 100-crore benchmark 12 days after it hit the screens. The 49-year-old actor is happy with the success of his film and says that he's made "enough money" and he wants to focus on the "right scripts" now. "For me the love of my audience is more important than the business. I think I have earned enough money. It is also important to get the right script, character, director and studio. It was my first experience with them and I would want to do more films for them," Akshay told media persons during a press conference, reports news agency PTI. Akshay Kumar released three films in 2016 - Rustom, Airlift and Houseful 3 - and all of them performed well at the box office. Rustom and Airlift were also critically acclaimed.

In Jolly LLB 2, Akshay Kumar plays the role of a lawyer and the actor says he relied on director Subhash Kapoor to play this part. "I have never dealt with lawyers, as I never got into in any legal trouble. Subhash Kapoor explained everything because he was a political journalist before turning a director. So, he had covered cases and knew how it works. I have never been inside a court."

Akshay also complimented his Jolly LLB 2 co-stars Saurabh Shukla, Annu Kapoor Sayani Gupta and Huma Qureshi. "I think what has helped this film is team work and screenplay. Saurabh Shukla, Annu Kapoor, they are the biggest pillars of the film. Huma Qureshi and Sayani Gupta have also done a wonderful job. I got to learn many things from Saurabh and Annu ji. I always used to crack this joke on the sets that Subhash has got six actors from NSD and four actors from FTII and I am the only one who is from Khalsa College," he said.

Promoted
Listen to the latest songs, only on JioSaavn.com
Akshay Kumar is arguably one of the most versatile actors in the film industry today. His upcoming releases namely 2.0 with Rajinikanth, Toilet: Ek Prem Katha and Padman, prove that. But Akshay told PTI that he doesn't understand the audience's mindset. "I don't think I have managed to catch audience's pulse. It is just a phase and your hard work pays off eventually. Many people make good films but they don't do well. But they always think that they are making Mughal-e Azam or Pakeezaah. But it does not happen - some films work, sometimes it doesn't," he said, reported PTI.