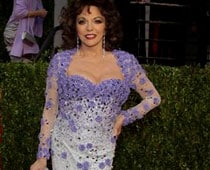 New York: Veteran actress Joan Collins was rushed to the hospital during a post-Oscars party after her figure-hugging dress left her feeling faint.

The 'Dynasty' star attended the Vanity Fair bash at Hollywood's Sunset Tower Hotel in a tight-fitting lilac gown, but after spending several hours with A-listers, the 77-year-old began to feel dizzy.

Her husband Percy Gibson called an ambulance for his wife and medics decided to rush the star to a nearby hospital for tests, reported New York Post online.

Collins was relieved when doctors assured her that test results were fine and blamed her corseted dress for the fuss.

"We had been there for seven hours, and I started feeling dizzy. I tried to get some air, but I felt really faint. I wanted to leave in our limo, but Percy decided to call an ambulance. We went to the hospital, and they did all the tests before the doctors told me I was absolutely fine and released me.

"The truth was, I made the wrong decision to wear a very tight dress, and had something rather like a Victorian swoon. The good news is, I am in good health and feel fine
today," said Collins.
Promoted
Listen to the latest songs, only on JioSaavn.com