After the posters of Jhanvi Kapoor's debut film went viral, Twitter asked Karan Johar: "Hope they have at least acted well, to justify your love for #Nepotism" 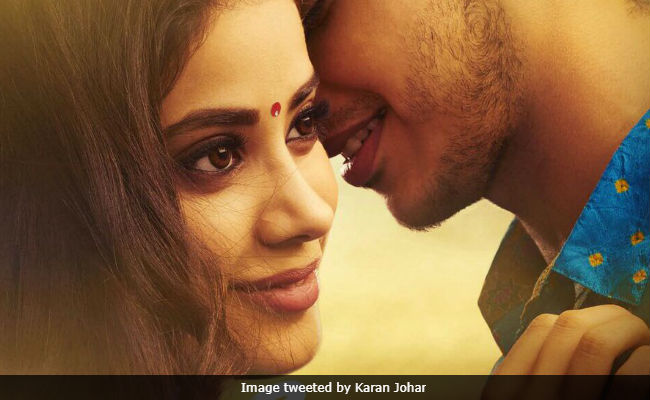 New Delhi: Jhanvi Kapoor, daughter of Sridevi and Boney Kapoor, and Ishaan Khattar, brother of Shahid Kapoor, have been happily welcomed by the film fraternity soon after Karan Johar shared three posters of their film Dhadak. It was also the moment social media had been waiting for to resurrect the nepotism debate. Soon after the posters of Jhanvi's debut film went crazy viral, Twitter users showered comments like, "Hope they have at least acted well, to justify your love for #Nepotism KJo" or "How long will you promote these star kids?" Dhadak is reportedly a remake of Marathi blockbuster Sairat, which featured Rinku Gupta in lead role, for which she also won a National Award.

What a bakwaas pairing ... she is looking much older than him.. Hope they have at least acted well, to justify your love for #Nepotism KJo!

Nepotism sucks. How long u will promote these star kids.

All Hail the Baap of Nepotism!!@karanjohar ..Lage raho.

Karan Johar was inducted into the debate of nepotism by actress Kangana Ranaut, who labelled him as the 'flagbearer of nepotism' on his talk show Koffee With Karan. Kangana was praised for her sass but the debate later transgressed from the subject.

Promoted
Listen to the latest songs, only on JioSaavn.com
Karan Johar re-invoked the discussion while hosting an award show along with actor Saif Ali Khan (son of Sharmila Tagore) and Varun Dhawan (son of director David Dhawan). The trio had chanted "Nepotism rocks!" - a comment which did not do down well with social media. The trio apologised for their remark in the following days and Karan Johar promised to "close this chapter once and for all." He also told NDTV: "Of course I don't believe that 'nepotism rocks'. Of course, I believe that only talent rocks."

Dhadak will be directed by Shashank Khaitan (Humpty Sharma Ki Dulhania and Badrinath Ki Dulhania) and the film will release on July 6, 2018.