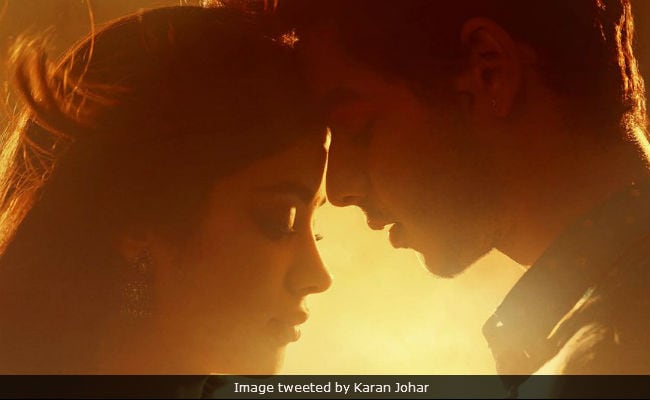 New Delhi: Yay! The first look of Sridevi's daughter Jhanvi Kapoor's much-awaited and much speculated Bollywood debut film is revealed. Filmmaker Karan Johar shared three posters of the film on Twitter today, which is titled Dhadak and also stars Shahid Kapoor's brother Ishaan Khattar. Jhanvi looks stunning in the posters and in one of them, she completely resembles her mother Sridevi. The first poster shared by Karan Johar, features a desert in the background as Jhanvi and Ishaan embrace each other in the fore. Directed by Shashank Khaitan, who has earlier directed Varun Dhawan in Badrinath Ki Dulhania, Dhadak will be produced by Karan Johar under Dharma Production. Karan Johar also delighted the fans by revealing the release date of the film, which is July 6, 2018.

Here are the other two posters of Jhanvi and Ishaan's Dhadak:

Presenting JANHVI in # Releasing 6th July 2018
But her debut on Instagram is today! https://t.co/mzVGR9GYU1@ShashankKhaitan@apoorvamehta18@ZeeStudios_@DharmaMoviespic.twitter.com/cEDZBs6zid

The film is reportedly a remake of Marathi hit film Sairat. Varun Dhawan has also shared his excitement about Jhanvi and Ishaan's film Dhadak and welcomed Jhanvi to Bollywood.

Promoted
Listen to the latest songs, only on JioSaavn.com
Earlier this year, Sridevi had dropped a major hint about Jhanvi's debut project in an interview with DNA, saying: "Yes, Karan has been talking to us about a film for Jhanvi and we've given consent. But we don't know which project it would be. Since Karan has recently acquired the remake rights of Sairat it is being presumed that our daughter would be launched in this project."

Are you excited for Dhadak, just like we are?