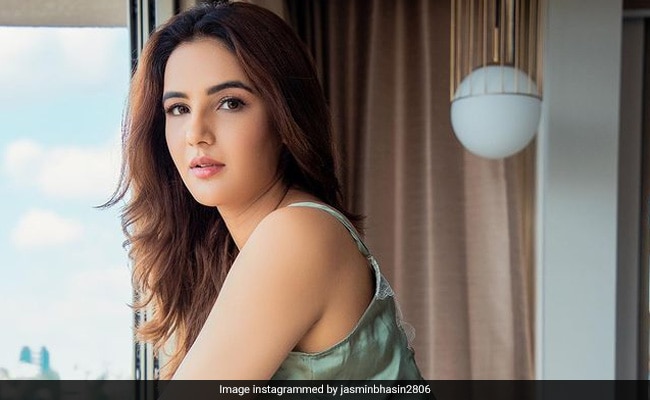 TV actress and former Bigg Boss contestant Jasmin Bhasin, on Thursday, dropped a brand new picture of herself on Instagram. In the picture, Jasmin Bhasin can be seen posing on her balcony. She looks gorgeous as she is dressed in a green satin top and white skirt. In the caption of her post, Jasmin wrote in Punjabi and said that she is missing someone. "Balcony vich khadi tainu chete kardi (Missing you standing on the balcony)," she wrote in the caption of the post. Jasmin's boyfriend, actor Aly Goni, reacted to her post and wrote: "36th floor se? (from the 36th floor)." Jasmin replied to Aly's comment and wrote: "haanji (yes)." Besides Aly, Jasmin's post received many more comments from her fans and friends.

Jasmin Bhasin and Aly Goni appeared in the recent season of the reality TV show Bigg Boss. They confessed their feelings for each other during the show. They are often seen spending time with each other. They also feature in each other's social media posts.

Earlier this month, Aly shared a video of himself and Jasmin on Instagram. The video features the couple dancing to Rahul Vaidya's song Aly. The original video of the song features Aly Goni and Jasmin Bhasin. "This song will always hold a special place in our heart.... Rahul Vaidya Thank you bro for this mind blowing song," Aly wrote in the caption of the post.

In terms of work, Aly Goni is mainly known for his work in the TV show Ye Hai Mohabbatein. Jasmin Bhasin, on the other hand, made her acting debut with the Tamil film Vaanam. She has featured in the TV show Dil Se Dil Tak.