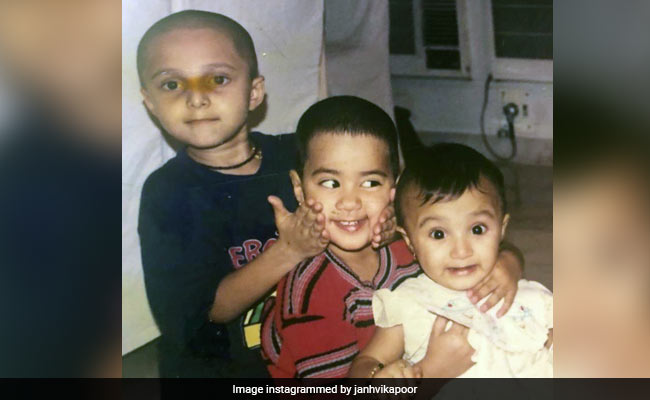 On BFF Tanisha Santoshi's birthday, actress Janhvi Kapoor made her a "scary" promise. "Promise to keep scaring you forever. Happy birthday, love you too much," wrote Janhvi on Instagram. As birthday greeting, she travelled down the memory lane and made an entire album of then-and-now memories, featuring pint-sized versions of herself and the birthday girl. Janhvi Kapoor sister Khushi also features in some of them. These blasts from the past will keep you busy for a while as you will try to spot who's who in the photos and that's what makes them fun. Tanisha Santoshi is the daughter of filmmaker Rajkumar Santoshi. Janhvi, Khushi and Tanisha are often spotted catching up in Maximum City.

Meanwhile, Tanisha Santoshi responded to Janhvi's post in the comments section: "Also Jay, I think this time you scared me enough to last a few years, don't you feel?" We also spotted something interesting - a comment by Mira Rajput: "Mundan looks are the best," she wrote. Mira Rajput is married to Shahid Kapoor - Ishaan Khatter's elder brother.

Shared today morning, Janhvi Kapoor's post garnered almost 2 lakh 'likes' in just a few hours. Janhvi's Instafam are delighted to have spotted a baby version of her and showered her feed with kiss and heart emojis.

Promise to keep scaring u forever. #HBD love u too much

On the work front, Janhvi Kapoor is currently occupied with RoohiAfza, in which she co-stars with Rajkummar Rao. She also has Karan Johar's multi-starrer Takht and the Gunjan Saxena biopic in her line-up. She made her Bollywood debut with 2018 film Dhadak.