Janhvi Kapoor Will Do This If Trolls Target Her Sister Khushi

"I'm just so happy for her and I hope it goes well," Janhvi Kapoor on sister Khushi's debut 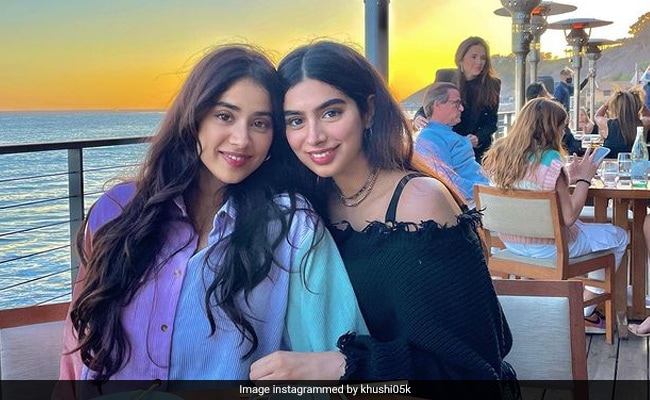 Janhvi Kapoor, who is busy promoting her upcoming movieGoodLuck Jerry, recently spoke about her sister Khushi Kapoor, who will be making her big Bollywood debut with Zoya Akhtar's The Archies, and revealed that her sister "wanted this so badly". In an interview with India Today, the excited sister, Janhvi, said that she visited the outdoor shoot and Khushi and her co-stars are talented and hard-working. The actress added that if trolls target her sister, Khushi, then, she will "screw them up".

Speaking to India Today, Janhvi Kapoor said, "I am so happy and thrilled. I have visited their outdoor shoot once briefly, their energy is so pure and I think they're making something that's from the heart and something that people are going to love. These kids are so talented and so hard-working. I've seen my sister work tirelessly and work really hard and she's auditioning for this role."

The actress added, "She (Khushi Kapoor) wanted this so badly, I'm just so happy for her and I hope it goes well. If anyone says anything bad about her, all these trolls, I am gonna screw them up. I swear, I hate them."

When asked if she has shared any advice or tips with her sister Khushi, to this, she said, "She doesn't need tips. She is brilliant."

Meanwhile, Janhvi Kapoor's GoodLuck Jerry will stream on July 29 on Disney+Hotstar. The movie is a Hindi remake of the 2018 Tamil film Kolamaavu Kokila, starring Nayanthara.

Oscars 2023: To RRR And Naatu Naatu, With Love From Arjun Kapoor, Parineeti Chopra And Others