The group was seen dancing to the song Qayamat, from the film Deewane 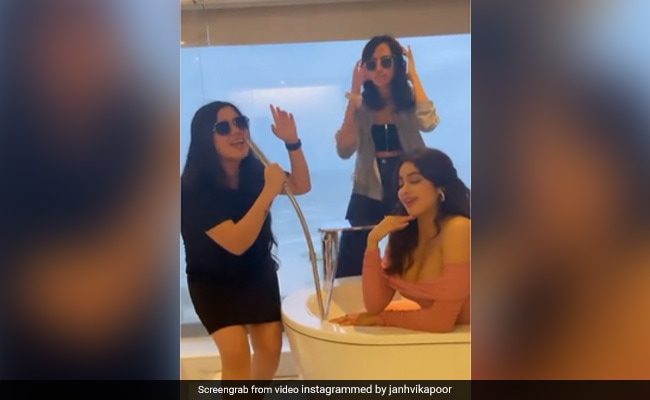 Guys, we have good news. Janhvi Kapoor is back with her “Aksa Gang”, with what we would call a blockbuster performance. For the uninitiated, Janhvi's Aksa Gang is a bunch of the actress' friends with whom she posted a dance video some months ago. The clip of the group taking on the “TemperatureChallenge” soon went viral and they followed this up for another one. While the second dance video featured the Tamil hit song, Nakka Mukka, this time around the group has gone the Bollywood way by grooving to the track Qayamat, from the film Deewane. The movie was released in 2000 and featured Ajay Devgn in the lead role.

But this is not the only reference to Ajay Devgn in the performance. This time, the clip also features a cameo by Ajay Devgn's wife, actress Kajol, albeit not in the flesh. Dancing to the line, “Yeh Kajal, Yeh Zulfein,” the group decide to go literal and pulls up photos of not one but two actresses with the name from Bollywood. Pictures of both Kajol and Kajal Aggarwal pops on the screen, as the team groove in the bathtub, wardrobe and on a bed.

And from Janhvi Kapoor falling into the bathtub to an erratic set of hilarious steps, the footage has it all.

And as expected, the clip has fans and followers in splits. Actor Arjun Kapoor, Janhvi's brother, said that it has “consumed” him. “The sheer arbid nature of this video is consuming me,” he wrote. Kajal Aggarwal seemed quite pleased with her cameo as she chipped in to say, “Hahaha... Love it.”

Now, that you have seen this one, it is only fair to treat yourself to the other two clips in this precious series.

Jahnvi Kapoor was last seen in the horror-comedy film Roohi. Her upcoming projects include Good Luck Jerry and Dostana 2.