Leave It To Janhvi Kapoor To Rock Every Mirror Selfie 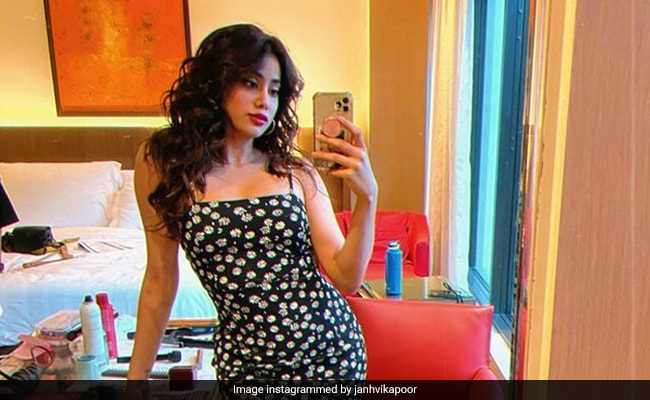 Who's slaying it with cute selfies and a playful caption? Not you, not me, but Janhvi Kapoor. Fun is on her mind even as she clicks mirror selfies of herself in a cute black minidress. What's her definition of fun? We get the answer once we see the photos she has shared on Instagram, where she doesn't, at all, mind a photobomb. In her photos, she is seen posing in front of a mirror, sporting her dress and curls. But just then someone from her crew steps in and is captured in the reflection. The next photo shows Janhvi smiling at the mirror while the other woman shrugs her hands, perhaps not approving these random clicks. Nevertheless, Janhvi wasn't deterred from posting the photos on Instagram. She wrote in the caption, "Always fun troubling Nazzz."

Late actress Sridevi and producer Boney Kapoor's daughter can pep up any photo either with her captions. Janhvi recently posted a magazine cover where she featured alongside her brother, actor Arjun Kapoor. While they look stunning in the photo, she wrote, "Us judging you for not being real foodies like us. Can you tell I've thought of this caption on an empty stomach?" Now, there we see the tragi-comedy of her post.

Somedays, the Dhadak actress may feel too lazy to think up the perfect caption. What does she do then? She simply leaves the task to our imagination while posing serenely in front of the camera. In one of her posts, where she looks enigmatic with dark eyes and tousled hair, she wrote, "Nonchalantly pensive quote about black and white photos and eyes being windows to the soul and all that." For sure, we can find her one to fit the description.

But when Janhvi is all too active, she can dance and frolic around the whole world and bring snippets together in short videos. She doesn't shy away from spilling out her best breezy looks to her accidental back crunch from a whimsical pose. If there's a fun bug, it will surely bite Janhvi someday. But for now, she's buzzed with Frank Sinatra's songs for this video.

Let us know what you think about Janhvi Kapoor's fun-filled captions and photos.