"When my niece insisted I dance with her on stage," wrote Maheep Kapoor 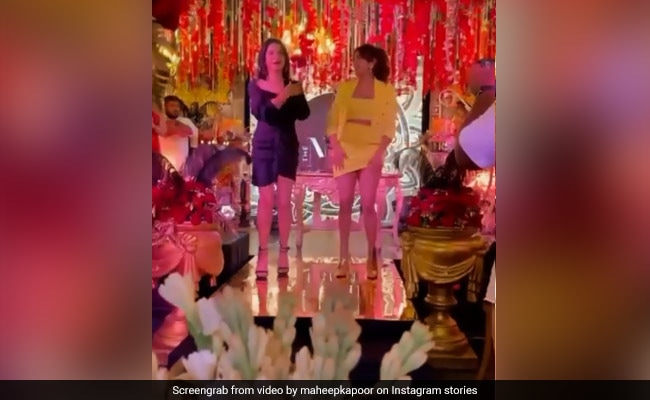 Janhvi Kapoor and her aunt Maheep Kapoor are now dance buddies. On Wednesday, Maheep Kapoor shared two videos of herself dancing with the actress to the track Nadiyon Paar from Janhvi's film Roohi at an event. Janhvi looks gorgeous in a yellow ensemble while Maheep Kapoor looks stunning in a black dress as the duo groove to the beats of Nadiyon Paar on the stage. The video happens to be from an event held in Bengaluru as Maheep recently posted similar pictures of herself from the city (more on that later). Maheep is married to Janhvi Kapoor's uncle Sanjay Kapoor. Sharing the video, Maheep wrote: "When my niece insisted I dance with her on stage." In another caption, Maheep hilariously added: "#ClearlyDancingNotMyForte."

The aforementioned clip was reshared by a fan page dedicated to Janhvi Kapoor. Check out the video here:

On Tuesday, Maheep Kapoor shared a set of pictures of herself and her friend Seema Khan. "Bengaluru diaries," she captioned the photos. Take a look:

Janhvi Kapoor was last seen in Hardik Mehta's Roohi, in which she co-starred with Rajkummar Rao and Varun Sharma. Check out her dance performance to the song Nadiyon Paar in the film here:

Janhvi Kapoor is the daughter of filmmaker Boney Kapoor and late actress Sridevi. Janhvi Kapoor made her debut in Bollywood with Shashank Khaitan's 2018 film Dhadak, a Hindi remake of Marathi hit Sairat. She co-starred with Ishaan Khatter in the film. Her next project was Netflix's anthology Ghost Stories, where she featured the Zoya Akhtar-directed segment.