On Khushi Kapoor's "Mandatory Bathroom Selfie" Post, A Rain Of Comments From Janhvi, Rhea And Others 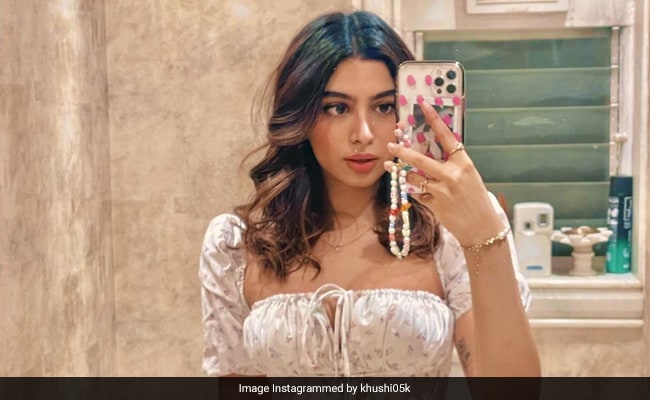 You may say mirror selfies are getting boring. We say you haven't checked out Khushi Kapoor's latest upload yet. Producer Boney Kapoor and late actress Sridevi's younger daughter knows the perfect way to flaunt herself in a photo. But this time, she hasn't shared just any normal photo or selfie. It's one of the bathroom selfies we so much love to take. And, oh boy. It is so cute. Khushi is seen holding her phone to get the perfect pose in her white dress, which she picked for Rhea Kapoor and Karan Boolani's post-wedding celebrations. "Mandatory bathroom selfies," read her caption. After Khushi shared the selfies on Instagram, her sisters and friends flooded the comments section. Actress Janhvi Kapoor, Khushi's elder sister, right away wrote, "Can I bite your arm yay."

Bathroom selfies are just one of the many ways that Khushi Kapoor loves to get her photos taken. What's her next favourite way to click photos? Just stand under the sun and let the shadows play. Khushi can look very busy soaking herself under the sun while posing for some great snapshots of her.

Her next favourite way of posing could be with Janhvi. The two sisters share a sweet and fun-filled relationship and brighten up our screens every time they come in front of the camera together. In these Diwali photos, Khushi and Janhvi are seen in exuberant vibes. In the last slide, we see them happily posing with their father Boney Kapoor.

Khushi Kapoor may indulge in beach snaps and family photoshoots. But she doesn't forget to bring her pet pooch into the picture. Khushi's cute moments often show us these two adorable beings together. See it for yourself:

Khushi Kapoor's love for her selfies and photos can be a delight to watch, especially when her loved ones leave their comments on her posts.